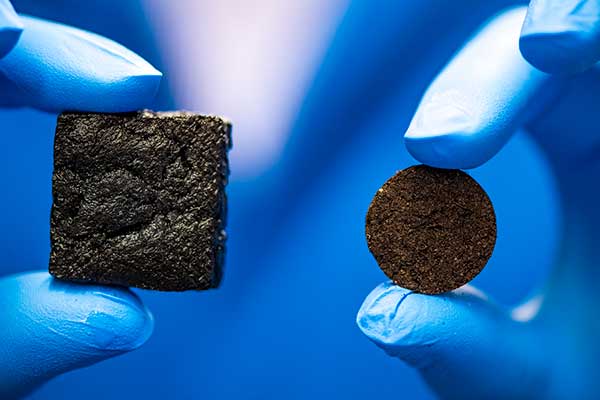 MIE Associate Professor Yi Zheng is using natural materials like cow manure and hornet nests to create filters that can be used in desalination systems.

Main photo: Yi Zheng, associate professor of mechanical and industrial engineering at Northeastern, holds a sample desalination filter made of cow manure and one made of hornet nests in his lab in the Mugar Life Sciences Building. Photo by Alyssa Stone/Northeastern University

Inspiration struck Yi Zheng on a summer visit to a local dairy farm. There were cows and horses and, Zheng noticed, that meant that there was manure everywhere.

An associate professor of mechanical and industrial engineering at Northeastern, Zheng is always looking around for ideas of how to create something functional out of natural materials. He wasn’t sure just yet what useful item he might be able to make from manure, but Zheng was pretty sure that that material held promise. And there would be no shortage of it.

So the professor asked the farmer for a bucket to take back to his laboratory. The farmer obliged, “free of charge,” Zheng recalls.

At the same time, Zheng was puzzling over a global problem: drinking water scarcity. Some 1.42 billion people live in areas of high or extremely high water vulnerability, according to UNICEF. And that’s only projected to get worse.

As a possible solution, engineers have been working to devise ways to turn seawater into freshwater. They have come up with some tools to remove all that salt in a process called desalination. Desalination systems usually rely on a thin film that serves as a filter that pulls the salt out of seawater when it is evaporated through it.

“But that material is kind of expensive to fabricate, and the material itself is not sustainable,” Zheng says. Furthermore, “the entire process for water desalination consumes electricity.”

Zheng thought, why can’t we just use sunlight to power desalination?

His vision wasn’t to install a bunch of solar panels on desalination plants. Rather, Zheng had a more direct approach. He wanted to design a filter that would be placed on seawater outdoors and activated by sunlight. No electricity necessary.

That’s where the manure comes in.

When Zheng took the stinky bucket back to his laboratory, he and his team decided to heat it up to 1,700 degrees Celsius (3,092 degrees Fahrenheit) in order to kill off any bacteria in the manure. Once they’d done that, the researchers found that they had produced a powdered form of carbon. They used that black powder to make a foam, which they turned into a highly absorbent material that floats on the surface of water. When put in sunlight, the water beneath the black material would turn to steam and pass through it.

Zheng had a hunch that that process would be a good desalinator, so he collected some ocean water to test it out. Indeed, when the steam from the salt water that had passed through the manure-based filter condensed back to water, it was remarkably fresh. The resulting water was so fresh, Zheng says, that its sodium concentration was significantly lower than the standards set by the U.S. Environmental Protection Agency for drinking water. Manure isn’t the only natural material Zheng and his team use to desalinate seawater in sunlight. Other materials they have used to make a solar energy-triggered carbon filter have included tree leaves, cuttlefish ink, crab and lobster shells, hornet nests, and office paper waste. Their approach is described in a series of recent publications in the journals Cell Reports Physical Science, ACS Applied Materials & Interfaces, ACS Omega, Nanoscale, and the Journal of Materials Chemistry A. Yi Zheng, associate professor of mechanical and industrial engineering at Northeastern, examines a hornet nest for his desalination project in his lab in the Mugar Life Sciences Building. Photo by Alyssa Stone/Northeastern University

“The materials we use are totally natural, sustainable,” Zheng says. “This natural material performs well, and is low-cost, easy to obtain, and easy to manufacture.”

That means this technology could empower local communities to build their own desalination systems, which could be important to move toward equitable access to drinking water around the world, Zheng says. “You cannot simply set a nanofabrication facility in a local village or a town, but people can simply collect the manure from a local farm and burn it easily. So the use of manure and tree leaves makes it really easy to access.”