Using Magnetic Force During 3D Printing at the Microscale 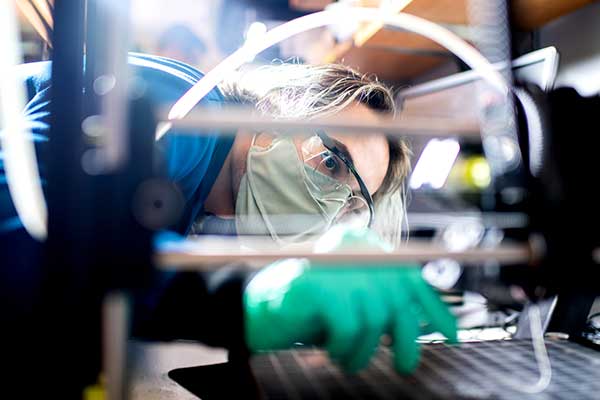 MIE Associate Professor Randall Erb is using a magnetic field during the 3D printing process to create strong complex ceramic designs that can be used in everything from circuit boards to hypersonic airplanes.

How magnets and 3D printers can make materials for hypersonic planes

Randall Erb is something of a ceramicist, but instead of a potter’s wheel, he uses magnets and a 3D printer to make his work. The end result is a ceramic material that can withstand extreme heat with applications ranging from circuit boards to hypersonic airplanes.

“The 3D printer allows us to create complex geometric structures that we couldn’t make with conventional manufacturing,” says Erb, associate professor of mechanical and industrial engineering and director of the DAPS Lab at Northeastern. “And the magnetic force we apply to the material during the 3D printing process orients the particles in an optimal way.”

Imagine hovering a large magnet over a disorganized cluster of paper clips. If the magnet is strong enough, the paper clips will untangle and stand on end in the direction of the magnet. Now imagine that same process on a microscopic scale. The magnetic field Erb uses during the 3D printing process aligns and orients particles in the ceramic material, giving the end product greater durability than if the particles had been irregularly oriented or oriented in a different direction. Researchers work in the Directed Assembly of Particles & Suspensions Lab in the Egan Research Center. Photo by Matthew Modoono/Northeastern University

To print these complex geometric structures, Erb and his team mix ceramic powder with a type of resin that is responsive to light. Then, they project light in the shape of the desired product onto the ceramic-resin mix. Wherever the light shines, the mixture is cured and hardened. As more of the structure cures, the 3D printer slowly adds more layers until the product is finished.

“Ceramic is a good material for anything that deals with high heat,” Erb says. “It isn’t conductive like metal, so it’s good for something like a circuit board. Ceramic wouldn’t short the circuit board, for example.”

The DAPS Lab was recently nominated for the 2021 3D Printing Industry Award, in part because of the lab’s unique ability to control materials on a microscale. Voting closes on Oct. 20, and the winner will be announced the following day.

In addition to their achievements in micromaterials, Erb also believes his lab has an edge over other competitors because of the success the DAPS Lab has had with industry partners in the past. “We’re application-driven, and we’ve created spinout companies, like Fortify, which is a Boston-based 3D printing company,” he says.

There’s no monetary prize for the competition, but Erb says winning would bring well-deserved notoriety to the lab and the university. “The award would highlight the importance of our research, which brings microscale design to 3D printing,” he says. “And to Northeastern as a whole, which is a leader in the field of 3D printing in general.”