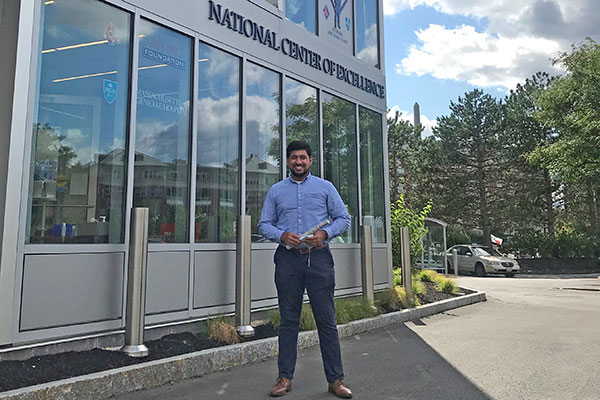 For Shriram Karthikeyan, ME‘20, data analytics engineering, data warehousing, and analytics is nothing new—but an 8-month co-op as an ETL Developer at the Home Base Program, a nonprofit geared towards helping service members, veterans, and their families, offered an opportunity to see the outcomes driven by data warehousing.

Awarded a challenge coin and a certificate highlighting his dedication to Home Base’s mission at the conclusion of his co-op, as is the custom in military culture, Shriram raved about his experience at the Red Sox and Mass-General-Hospital-supported foundation. The coin’s significance stems from a military tradition of leaders awarding their coins to subordinates for a job well done. Traditionally, one carries the highest-ranking coin they’ve been awarded on their person.

Shriram’s team director, Laura Lakin, is a captain in the Massachusetts Army National Guard along with her role at Home Base. Cory Stasko, associate director of business analytics and systems engineering as well as Shriram’s manager, is also a Northeastern alum (E’13, industrial engineering).

“The best part of Home Base is that it was the most positive professional experience that I’ve had in my entire career,” said Shriram. “I have never worked with any group of people that was as motivating and as encouraging as that team. Every single piece of development that we did, was completely acknowledged and appreciated.”

Shriram’s certificate more specifically thanked him for his work with Data and Analytics Manager Erich Stahl and fellow co-op Abhinav Kaushik, ME‘20, data analytics engineering, in advancing Home Base’s data warehouse to provide statistics aiding their multifaceted efforts to help alleviate struggles dealt with by military veterans and their families. Shriram’s work on the data warehouse at Home Base was implemented using both SQL and Python to facilitate Tableau reporting on patient measures and analysis on treatment outcomes. Stahl, who worked closely with Shriram as the senior member on the data warehousing project, retired on the same day that the co-op concluded.

Home Base assists veterans and their families with resolving issues ranging from mental health and substance abuse programming to nutrition services. Home Base’s services cover not only the veteran but include both their parents and children in a holistic three-generation approach to solving problems facing the larger community of military veterans.

Shriram’s role revolved around managing the data related to the program’s wide range of services, helping to quantify how involvement in the program affects the participants and to measure treatment outcomes.

“I never had any production or hands-on experience in an actual, real-world environment where I could use Python,” he said of the valuable new experience working as an ETL developer at Home Base. “I learned that by doing some Python programming in my Data Management and Design course that I took under professor Nicholas Brown—that helped me quite a bit.”

After receiving his Bachelor’s in Information Technology from Anna University in Tamil Nadu, India, Shriram gained four years of experience as a developer and eventually as a senior software engineer at Systech Solutions, an IT management firm, in Chennai, India.

At the time he accepted the co-op role, Shriram was unsure as to exactly how much new and unique experience the position would offer following his own extensive experience.

“I was actually worried in the beginning of the co-op if I would learn anything new; I was so wrong,” said Shriram. “I was so wrong, and I couldn’t be happier.”

The graduate student speaks of his experience at Home Base as invaluable both professionally and personally, fully satisfied with his first experience working with a nonprofit for both the experience and the lessons it taught him about his role in helping others in society.

“In the beginning, it was a little bit overwhelming. I told my boss, there’s a lot of stuff, so let’s try learning by immersion,” Shriram said. “We decided to throw me off the deep-end into the pool and I learned how to swim.”