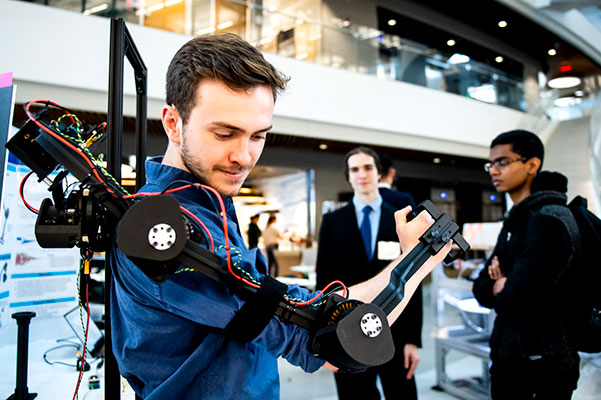 Robotic arms, a device that disinfects your iPhone, and other mechanical engineering wonders

“How much of a doctor’s skill or a surgeon’s skill relies on them being able to feel what’s wrong?” asked Orion Wilmerding, a fifth-year mechanical engineering student.

Wilmerding stood in front of a simplified robotic arm, with exposed motors and timing belts at the elbow and shoulder joints. Nearby, an interested student wore a series of motors and sensors strapped to his arm.

The two arms were part of an “avatar system” that allows a human to operate a robot remotely, designed by Wilmerding and four other Northeastern mechanical engineering students.

“It takes over 80 hours of training to get used to performing surgery remotely, without actually being able to sense what’s going on,” Wilmerding said. “When you put on an avatar system, which has haptic feedback, it’s like you’re actually there.”

When the wearer moves her arm, the robot arm moves in the same manner. And when the robotic arm touches an object, that feeling is translated back to the wearer. This kind of system could help doctors interact with patients remotely, improve the controls over robots sent into disaster areas, or assist in disabling explosive devices without putting human lives at risk.

“It adds that level of human touch back into a robotic system,” Wilmerding said.

An adaptive baseball pitching machine on display during the mechanical engineering capstone showcase at the Interdisciplinary Science and Engineering Complex. Photo by Ruby Wallau/Northeastern University

The design was a mechanical engineering capstone project, which gives students the opportunity to complete a multi-semester team project that applies the knowledge and skills they’ve learned at Northeastern. This was just one of the many capstone projects on display in the Interdisciplinary Science and Engineering Complex on a snowy Tuesday in Boston.

Mechanical engineering students have spent the last six months designing and prototyping a battery-powered water purification system, a machine to speed up the processing of cocoa pods in Nigeria, and a scanner to help with surgery to remove skin cancer, among others.

Brandon Goldstein and his teammates have been working with a startup company to design a centrifuge that can extract additional oil from the waste products of oil and gas companies.

Currently, three to six percent of the oil extracted from underground wells doesn’t make it to refineries, Goldstein said. It’s mixed in with wastewater, salt, and sediments that the companies pay others to dispose. The students’ centrifuge spins this material rapidly and smoothly, allowing the oil to separate from the contaminants.

“It’s not only financially beneficial, for the industry, but it’s also beneficial for the environment,” Goldstein said. “It’s making the best use of the resources we have.” A phone disinfection device cleans a phone during the mechanical engineering capstone showcase at the Interdisciplinary Science and Engineering Complex. Photo by Ruby Wallau/Northeastern University

Another team was working on solving a problem that was closer at hand: the microbes growing on our cell phones.

“We use our phones every day,” said Gerardo Milano. “Phones are basically an extension of ourselves, and because of that, we believed there was an implication that mobile phones could be a reservoir of bacteria.”

The team members tested the bacterial colonies on their own phones, and set to designing a method of removing them. They created a box which, in a 24-second cycle, wipes the phone’s surface with a microfiber cloth and exposes it to ultraviolet light.

“We did a lot of testing with E. coli in the biology lab,” Milano said. “After 10 seconds of exposure to UV-C [ultraviolet light] and wiping, we killed most of the bacteria.”

A nearby group had also focused on hygiene. The students built a kit to clean dental implements, like an aligner or a retainer. One piece is a portable case, which disinfects using a 30-second cycle of ultraviolet light. The second piece, intended to be plugged in at home, uses ultrasonic vibrations to clean stains and debris.

“We did testing in the optical science laboratory here at Northeastern, with staining using a baby food and coca cola mixture, as well as debris contamination using chocolate frosting,” a mixture suggested by a local dentist who consulted on the project, said Michael Brockman, who will be graduating this December.

Brockman and his teammates are intending to file for a patent on their technology. Other projects are the first steps of larger designs—the remote-controlled arm is going to be part of an entire suit to control a humanoid robot in a 2022 competition.