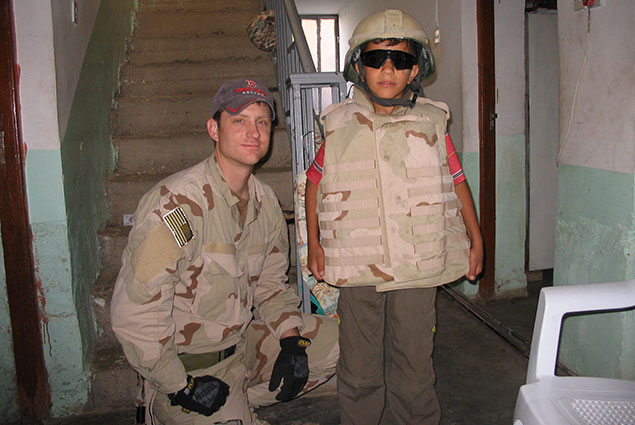 While he hasn’t formally received his degree yet, you could say that Mike McMahon, BS, Mechanical Engineering 2019, has been an engineer his whole life. “Whatever job I’ve had, I’ve been interested in the mechanical and mathematical aspects of it,” says McMahon. “I grew up working in my dad’s bakery, and from a young age I was interested in the ovens, the ingredients—the way a product comes together.”

As a First Lieutenant, Ranger, and Platoon Leader in the US Army—planning and executing more than 180 combat missions in Iraq and deploying to Kosovo as a peacekeeper over nine years—McMahon continued to apply his engineer’s eye. “There are so many factors in a military mission’s success, including the skills of the team and the capabilities of the weapons,” he emphasizes. “In many ways, it’s a mathematical or engineering exercise.”

After retiring from combat, McMahon worked as a project manager for the US Special Operations Command, awarding contracts to military suppliers. He spent eight years in this position, yet yearned for more hands-on work.

Then he made a bold decision: He wanted to fulfill his burgeoning desire to become a professional engineer and work on technical projects. McMahon first enrolled at MassBay Community College to study mechanical engineering. Then, after meeting representatives from Northeastern’s College of Engineering when they visited MassBay, he transferred to the University to finish his degree.

“It’s a hard decision to give up a secure job and pursue a college degree, especially when you’re an older student,” McMahon says. “I was worried about how I’d be received at Northeastern, surrounded by brilliant 20-year-olds. These students are an elite group.”

“But I’ve felt welcomed by my peers,” he continues. “The faculty take an interest in students and help them overcome their unique challenges; the professors are invested in my success. When the volume of students and course-load become heavy, there are a lot of other resources available on campus. And, by joining informal study groups and organizations like the ASME student chapter, I’ve felt the excitement of connecting with other students who are passionate about science and engineering, just like me. Everyone here shares the dream of being an engineer, and in the end, we have more similarities than differences.”