Fulbright to Study in Iceland 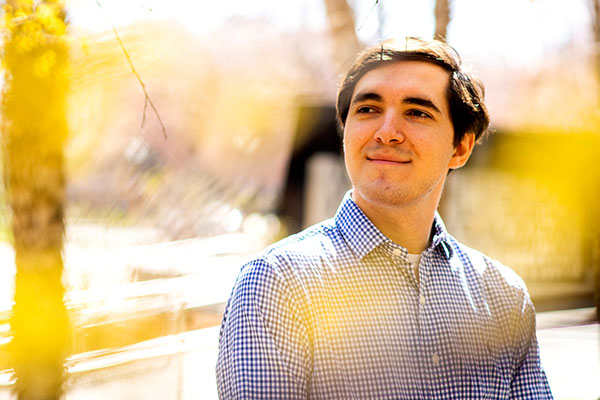 Mechanical engineering student Tyler Gogal, E’21, has received a Fulbright Open Study/Research Award to pursue a master’s degree in environmental engineering with a focus in water resources from the University of Iceland.

Main photo: En route to Reykjavik eight years ago, Tyler Gogal, a mechanical engineering student, received a bottle of pure Icelandic spring water. He still has that bottle today—a symbol of his future academic career in water resource engineering at the University of Iceland thanks to the Fulbright Open Study/Research Award. Photo by Matthew Modoono/Northeastern University

On a flight to Reykjavik eight years ago, a flight attendant handed Tyler Gogal a complimentary bottle of water, a forgettable token of standard airline hospitality, but not for Gogal, who was wowed by the plastic bottle, shaped in the likeness of a glacier and full of Icelandic spring water. Almost a decade later, he still has the bottle, cap sealed, in his bedroom.

After years of marinating in plastic, the purity of that water is questionable. “I wouldn’t drink it,” Gogal says. But that’s besides the point now. Today, the bottle is purely symbolic, a foreshadowing of the academic career that lies ahead for Gogal, who recently received a Fulbright Open Study/Research Award to pursue a master’s degree in environmental engineering with a focus in water resources from the University of Iceland.

In addition to having a natural abundance of fresh spring water, Iceland is a leading innovator in sustainable water infrastructure, says Gogal, who will graduate from Northeastern with a degree in mechanical engineering this spring.

“Iceland’s approach to water quality is inspiring,” he says. “I’m particularly interested in wastewater remediation and how we can apply that to agricultural systems.”

While visiting Iceland with his family in 2013, Gogal toured a greenhouse. “You wouldn’t think there’d be a lot of agriculture going on in Iceland,” he says, referring to the country’s rocky terrain and cold climate. “But by using greenhouses and hydroponics, they were able to utilize their resources in such an efficient way.”

The experience was formative for Gogal. After sampling some greenhouse-grown tomato soup at the end of the tour, Gogal knew he wanted to return to the island to learn more about its sustainable farming practices.

Right now, Gogal is finishing his capstone project, which involves creating a hydroponics system that people can easily use at home. Gogal plans to continue this line of work at the University of Iceland where he will focus on devising hydroponics systems that use reclaimed water, among other innovations in the realm of advanced farming methods.

During his time at Northeastern, Gogal chose to study mechanical engineering in the hopes of one day applying those skills to environmental sciences.

Reflecting on the scholarship and his time at Northeastern, Gogal expressed thanks for his undergraduate professors, especially Ameet Pinto, assistant professor of civil and environmental engineering, who guided Gogal toward environmental sciences and exposed him to the potential for collaboration between many fields of engineering.