Ideas to Lead By 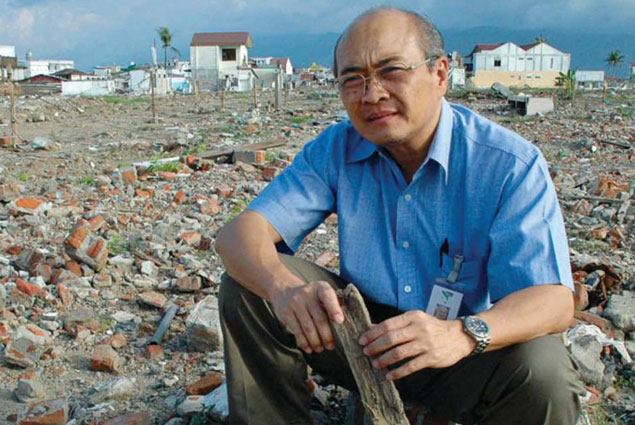 Kuntoro Mangkusubroto, MS, Industrial Engineering, 1977—Learn more about him in a story published in Winter 2011/2012 issue of Northeastern Magazine.

Kuntoro Mangkusubroto, a minister and trusted senior advisor to Indonesian president Susilo Bambang Yudhoyono, holds multiple posts in the Indonesian government that are considered vital to the nation’s development and sustainability goals.

As head of the President’s Delivery Unit for Development Monitoring and Oversight, Mr. Kuntoro, ME’77, identifies obstacles to development programs and leads the effort to resolve them. He also chairs the presidential task force assigned to addressing issues of deforestation and environmental degradation.

Mr. Kuntoro brings a wealth of experience and education to those challenging positions. From 2005 to 2009, he led a complex reconstruction effort in Aceh-Nias, the region of Indonesia that was devastated by tsunamis, resulting in an estimated two hundred thousand deaths. He oversaw a recovery that cost nearly $8 billion, while setting a standard for post-disaster management that few international observers thought possible.

As a professor at Bandung Institute of Technology’s School of Business and Management—a school he cofounded in 2003—Mr. Kuntoro focuses on decision-making and strategic negotiation.

He held significant leadership roles in the Indonesian energy and natural resources sectors from 1989 to 2001, serving as Minister of Mining and Energy and CEO of three companies: PLN, the state electricity company; PTBA, the state coal mining company; and Timah, the state tin mining company. His successful restructuring of Timah made it Indonesia’s first state-owned enterprise to be publicly listed on the stock exchange.

Mr. Kuntoro has earned numerous awards and honors, including the Association of South East Asian Nations Engineering Excellence Award. He chairs the Global Rescue Network, an Indonesia-based nonprofit focusing on search and rescue missions in disaster zones. He also sits on the advisory board of the Asia Competitiveness Institute at the National University of Singapore’s Lee Kuan Yew School of Public Policy.