Getting a Rover Ready to Compete 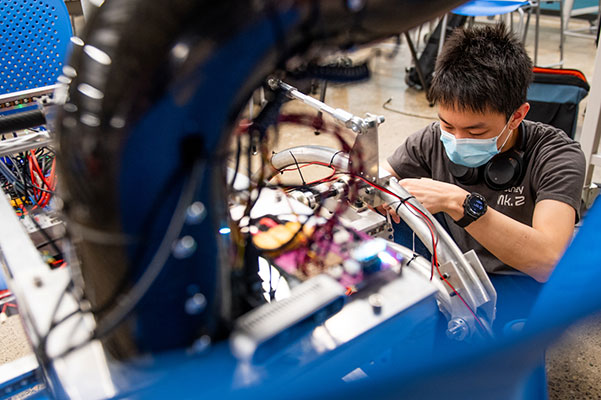 Students have developed a rover to explore Mars. But first, it has to roam on campus.

But when the rover jerks to life and starts to roll across the shiny cement floor, it might as well be among the ranks of Curiosity, Sojourner, Perseverance and the other mechanical envoys that have roamed the surface of the red planet.

In an adjoining conference room, Ben Thacher’s eyes are glued to his laptop screen. His thumbs wobble over the joysticks of a controller as the electrical and computer engineering student directs the rover—named Watney Mark 2.1—toward a wooden tower.

This six-wheeled rover is the Northeastern University Mars Rover Team’s entry in The Mars Society’s University Rover Challenge, an annual competition in which qualifying teams from schools around the world design mechanical explorers that can emulate the tasks that a rover would need to perform during a mission to Mars. Those undertakings include equipment servicing, autonomous navigation, and extreme retrieval and delivery.

The global competition is typically held at the Mars Desert Research Station in southern Utah, but due to the pandemic, the event is virtual this year. The Northeastern team was the only rookie team to join the challenge in Utah in 2019 and Watney Mark 2.1 (a nod to Matt Damon’s character in the film The Martian) is an updated version of the rover that the team developed then.

The rover can navigate over rough terrain, identify signs of life (both currently present and extinct) in soil, and its arm moves in a fluid motion rather than a series of several movements. “It’s like a human hand,” says Thacher, who is the arm team lead and works on the rover’s software and electrical systems as well.

Simply seeing the rover moving in real life has been “exciting” for Santa Mittal, the acting team lead who just graduated with a degree in chemistry. For most of the past year, the team had to develop the rover’s capabilities in a simulation, due to the pandemic. “Just the fact that the rover drives is so amazing to me,” she says.

“It’s very cool seeing it avoid obstacles and drive around,” agrees Garrit Strenge, who is already thinking about how to improve upon Watney Mark 2.1 over the next year. The Watney Mark 2.1 rover reaches to show off its grabbing function during The Mars Society’s University Rover Challenge on June 4, 2021. Photo by Matthew Modoono/Northeastern University