From Paraguay to Northeastern University 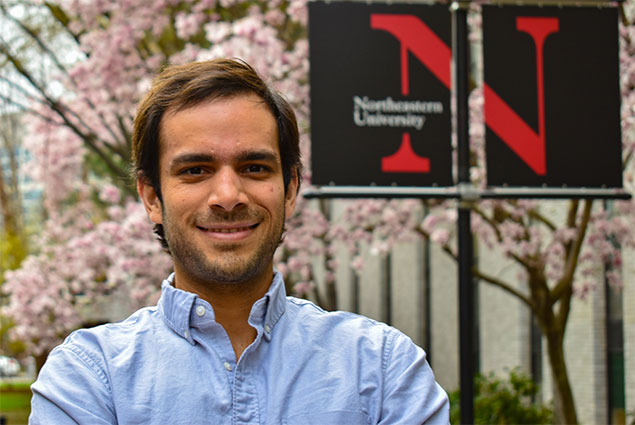 When Ricardo Careaga, MS Energy Systems and Gordon Engineering Leadership Program, 2019, was a child growing up in Asuncion, Paraguay, he would frequently go to buy goods at a corner store in his neighborhood. Roughly 20 years later, in the second year of his graduate degree in Energy Systems at Northeastern University, he is helping to lead a research team of students finding ways to help stores like these get better access to nutritious foods.

The project, titled, “Tackling Undernourishment Through Supply Chain Analytics in Food Deserts,” was part of his graduate certificate in Supply Chain and Logistics.  The project won the Grand Prize for the best capstone project at the 2019 MIT CTL Research Expo, where over 180 master’s students from 42 countries showcased their work. For the project, Careaga and his group tackled the issue of food deserts in Latin America and ways they can be overcome, mainly by reconfiguring the supply chain.

“A food desert, by definition, is an area where the residents cannot access healthy food,” explained Careaga.  “That could be because of availability or because of affordability. This particular situation is not exclusive to Latin America. From the USDA, there is a study that says that almost 10 percent of Americans are living in food deserts.”

The group researched the reasons behind the food deserts and discovered that the issue stems mainly from economic and supply chain disadvantages among the owners of corner stores, also called nanostores (Fransoo, et al., 2011). The nanostores often have a market of roughly 200 people living in that particular community, and it is estimated that they account for 50% of the retail business in developing countries.

One of the main issues is that nanostore owners get almost all of their products from Consumer Packaged Goods (CPG) Companies. CPGs have an advantage over farmers who produce fresh fruits and vegetables in terms of price and shelf life of their products. The longevity of CPGs makes them a more economically viable option for retailers over fresh food, but a less nutritious option for consumers because most of these products are junk food.

“Companies producing the CPG are typically more nimble in their logistic capabilities because they manage a lot of products and SKU (stock keeping unit),” Careaga explained. “They have very well settled distribution chains, so it’s difficult for the farmers to compete with all of this.” 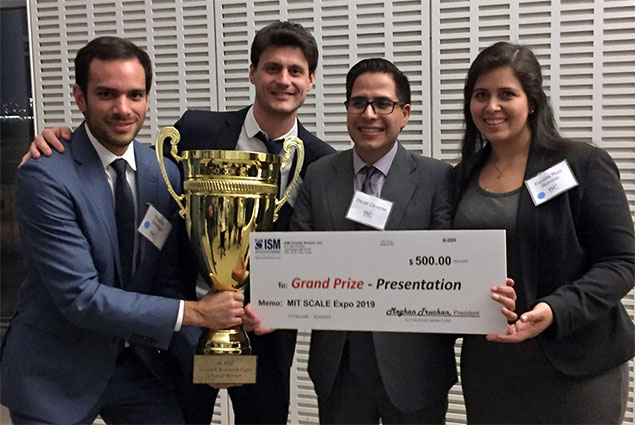 Careaga (left) and his group accepting the grand prize at the 2019 MIT CTL Research Expo.

Because the communities are heavily reliant on these nanostores, the lack of availability of and access to nutritious foods becomes a problem.

“In many of these communities, transportation can be an issue to get access to stores where they can buy bulk for a better price and better quality,” said Careaga. “This reality creates a dependency on these corner stores. For the stores, it’s a case of availability. They most likely don’t have any healthy food. They only have CPG, which in general are highly processed and highly charged of fat and sugar, like sodas and chips. Another characteristic is that these products are single packaged, making them more accommodating to residents dealing with time and budget constraint.”

Ease of use is another factor that plays into the advantage of CPG companies as well in the sense that CPG products take less time to consume. For example, opening a bag of chips is easier than peeling or cutting fruit and vegetables. For people in a city like Sao Paolo, Brazil, where residents have work commutes that can exceed four hours per day, time is of the essence.

“Ninety percent of people (in Sao Paolo) surveyed said that time was a constraint more so than price,” said Careaga. “So they would be prone to spend more money because they cannot afford the time.”

Careaga’s group concluded that the way to overcome food deserts would be through the supply chain. The supply chain entails how the food gets from the grower to the plate of the consumer, and all other aspects that come into play within that process.

Prior to coming to Northeastern, Careaga worked at a brewery, AB InBev, in Paraguay for three years where he studied the supply chain and realized the power it has in throughout the business.

“We need to find a way to bring the producer closer to the retailer and shorten the supply chain,” said Careaga. “That will save on costs and time, which are the main hurdles for getting fruits and vegetables to food deserts.”

“It’s not profitable for big companies to go to food deserts because they don’t have the reach and it’s just not worth it,” said Careaga. “We think this can be solved by starting from the bottom up and connecting the food store to the producer.”

They discovered that the supply chain is filled with too many middlemen that increase the time and the cost of the process.

Aside from adjusting the supply chain, there are other ways to reach food deserts including public awareness campaigns to educate the public about the personal as well as the economic importance of diets.  It’s estimated that malnutrition in communities, like the ones Careaga and his group studied, can reduce a country’s GDP by two to three percent due to health issues and lack of productivity. 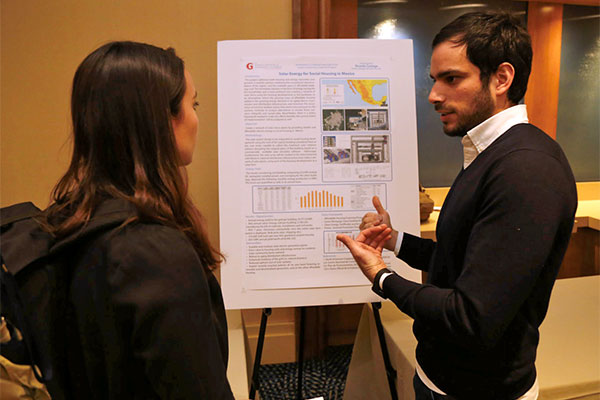 Careaga (right) explaining his capstone project to a student.

Careaga’s group members, who were all living in South America during the project, surveyed people in the food deserts to see if they preferred either natural or processed fruit juice. The participants of the survey were not informed of which juice was natural or which was processed. Ninety percent of the participants said that they preferred the juice made from fresh fruits and an additional 6.5% changed their mind after learning that had chosen processed juice.

“We found that the initiatives that raise awareness in the point of sale are very effective,” said Careaga. “There is also research that states that the best way to internalize is when you present the [participants] with both options, by explaining to them that processed foods will increase your chances of having an obesity problem whereas fresh fruits will make them feel better and more full.”

The group found other methods that can help as well; for example, they discovered a company that will sell squashes to the retailers that are already peeled. Selling packaged dried fruit is also a possibility as it is nutritious while providing the retailer with the advantages of CPGs like shelf life and ease of use.

The retailers’ strong interest in solving this issue made Careaga and his group particularly hopeful about action being taken towards decreasing the number of food deserts in Latin America.

“In Latin America, in these boroughs and neighborhoods, these stores are like a social hub,” said Careaga. “The people gather there and get to know the retailer and they have a rapport between them. So this is why the retailer would prefer to sell the healthier option, and why this is mainly a systemic problem.”

Careaga knows this because he knew the owner of his childhood corner store and was himself part of one of these corner store communities. He had a particular interest in helping to solve this problem during his education, not just because of the engineering work, but because he has experienced this problem first hand.

Careaga graduated from the Energy Systems master’s program in May 2019. He’s going back to work at a hydro dam called Itaipu Binacional, where he worked for three years before coming to Northeastern. Careaga is eager to return to his former employer with all of the knowledge he gained from his experience at Northeastern, specifically, The Gordon Leadership Program.

“The Gordon Engineering Leadership Program focuses to help engineers trying to enter the managerial aspect of the business, which was entirely my case because I have six years of experience working on the technical and operations side at the brewery and hydro dam,” said Careaga. “The program was amazing and also gave me the opportunity to work on another capstone project where I worked to integrating solar energy into affordable housing in Cancún, Mexico.”

Careaga credited the Gordon Engineering Leadership Program for equipping him with the diverse skills to succeed in the MIT CTL Research Expo by expanding the learning beyond just engineering work.

“The Gordon Engineering Leadership Program helped me develop skills not only in engineering but also in the aspects of project management and business leadership,” said Careaga. “I’m so proud to have won the grand prize at the Research Expo as a Northeastern student because it was very intimidating going up against students from MIT and other schools. I think my experience with the Gordon Engineering Leadership Program gave me an advantage during the project.”

Careaga strongly encourages future students to look for opportunities like the Gordon Engineering Leadership Program and others in the Boston academic community during their studies.

“These opportunities, the Gordon Engineering Leadership Program, and everything else I have experienced at Northeastern has me more than ready to go back and work in the engineering field.”