First a Passion for Legos; Now a Sr. Mechanical Engineer 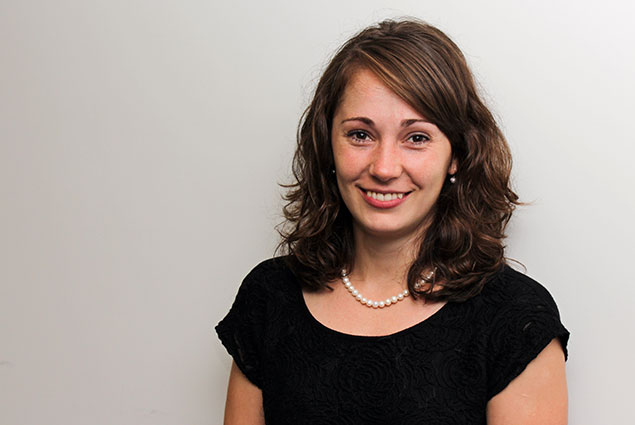 Adrienne Clark, BS/MS, Mechanics 2011—Growing up in Hopkinton, New Hampshire, Adrienne Clark, BS/MS’11 with a major in mechanical engineering, was fascinated by her older brothers’ Lego and K’NEX toys. “I’ve always been drawn to architecture, math, science, and doing mechanical things with my hands,” says Clark.

This early passion was supported by her mother’s efforts to incorporate math and science lessons into everyday life, as well as an engineering program called Project Lead the Way at Clark’s high school. “As a 14-year-old freshman, I was introduced to the field of engineering and topics like computer-aided design,” Clark recalls. “Based on that, I always knew I wanted to be an engineer and solve mechanical problems. There was never a question.”

Even Clark’s choice of a university seemed obvious. Her brothers, Joseph Jalbert (E’08) and Julien Jalbert (AMD’11) were already attending Northeastern and thriving there. “I loved the idea of co-op the most, since I’m a very practical person,” admits Clark. “I was excited about the idea of doing meaningful work as a 19-year-old, and graduating with three full-time jobs on my resume.”

Clark’s first co-op was at ATA Engineering in San Diego, where she used computational modeling tools to engineer components for helicopters, rockets and other aerospace innovations. She performed a similar role at her next co-op at ATA’s research facilities in Los Angeles.

Fikst—a Boston-based engineering consulting group—was her third co-op and it turned out to be a keeper. In fact, Clark still works for Fikst today as a senior mechanical engineer. “I was excited about working at Fikst from the first day,” she says. “The firm only employed five people, including me. I was thrown into real engineering projects from the start—using CNC machines and 3D printers, building prototypes, and meeting with clients. It was a huge responsibility, but it was also thrilling.”

Today, Clark applies her passion for hands-on work and problem solving on behalf of a wide variety of Fikst customers. “Recently I helped a well-known candle company design a wall plug-in product for consumers. I also developed an automated pet food dispenser that can be activated by a smartphone. I’m currently supporting a biomedical company by engineering a sanitization system for laboratory equipment. My job is so diverse, and yet every day I’m focused on solving real-world challenges. I can definitely see the value of my Northeastern education.”

As a means of giving back—and encouraging a new generation of problem solvers—Clark has taught “Product Design Methodology for Engineers” as an adjunct faculty member at Northeastern’s Sherman Center for Engineering Entrepreneurship Education. “It’s so gratifying to watch students generate a concept, physically represent that idea in a prototype, and then present it to their peers,” concludes Clark. “It’s everything I personally love about engineering, and it brings me full circle.”