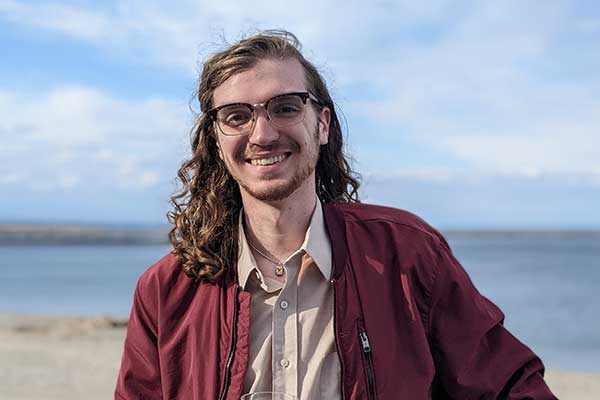 Christopher Gehrke is a fifth-year student at Northeastern University graduating this May with a combined bachelor’s degree and master’s degree in Industrial Engineering.

Gehrke started at Northeastern University knowing that he wanted to study in a program related to applied mathematics. As a student in the College of Engineering, he had the opportunity to learn about the various engineering majors that Northeastern had to offer. Industrial Engineering stood out among the other programs because of its emphasis on strategic problem-solving using data. Gehrke enjoyed finding the best pathways to solve Industrial Engineering problems, which reminded him of the puzzles that he did growing up in Southeast Pennsylvania. He has also been involved in academic research while at Northeastern. During his first year, Gehrker worked as an undergraduate researcher in an electrical engineering lab and focused much of his work around MATLAB. While his work at this lab was not explicitly what he was interested in pursuing, it served as critical work experience and exposure to academia.

Gehrke is an active member of Northeastern community activities which include playing tuba for the pep band and lighting design for NUStage and NUDANCO. Lighting design was a unique way for he to apply engineering skills and artistic skills together in an application separate from his academic studies. His favorite show he has worked on was NUStage’s production of Cabaret in Fall 2018, and he even went on to do lighting design for community theaters in Minneapolis and Boston.

Gehrke first learned about the Galante program when speaking with Professor Beverly Kris Jaeger-Helton. He was drawn to Galante’s focus on communication and soft skills development which differed from his data-driven interests in industrial engineering. He then began attending Galante events as a second-year student. While he was not yet eligible to be an official member, attending events early helped confirm his interests and involvement in the program. One event that had an impact on him was Boston University Professor David Marino’s guest speaker event. This seminar introduced improvisation games to develop communication skills. David Marino’s creativity and engagement drew Gehrke closer to the program, and soon after his acceptance into the Industrial Engineering BSMS Program he officially joined Galante.

Gehrke is now a leader among his Galante cohort as a Research Coordinator. His primary responsibility is to interview alumni to determine where Galante’s value lies and where improvements can be made. Like Gehrke, many alumni have found that the most valuable skills that Galante helped develop are communication and networking – skills that traditional engineering programs cover in a limited capacity.

In addition to his professional development with Galante, Gehrke has had three professional co-op experiences. His first co-op was at Johnson & Johnson as a part of the supply chain team. His project was to ensure that Target had enough Tena adult diapers and Visine products in stock, and he was responsible for maintaining accurate and timely data for non-technical teams. He also had the opportunity to train in Lean Six Sigma.

For his second co-op experience, Gehrke wanted to find an opportunity that was more industrial engineering-focused rather than tangentially focused like his first co-op. It was at Disney where he would get this opportunity. He worked with Disney’s frontline operations staff as well as technical staff and gathered and analyzed data to improve the guest experience. One unique project experience was when he was charged with increasing utilization and ridership of Millennium Falcon’s Smuggler’s Run. To accomplish this goal, he had to understand all aspects staff member ride responsibilities as well as the user’s experience by working on the ride and talking to guests. Gehrke loved this experience because he was able to apply the skills he learned in class and with Galante at a company that valued optimization and user experience.

During his sophomore year, Gehrke started working part-time at the Healthcare Systems Engineering Institute with Professor James Benneyan. He was tasked with finding tools to improve healthcare quality and experience. A significant project that he worked on was modeling tobacco usage as a pandemic. He presented this research at the IISE’s Healthcare Systems Process Development conference and once the COVID-19 pandemic started, applied his model to his research and even had a paper published (DOI: 10.2196/24292). He would continue to work with Professor Benneyan while he was not on co-op. Gehrke learned that he loved working in the healthcare space, but preferred more practical implementations, and for his third co-op Che joined Boston Children’s Hospital for the Enterprise Project Management Office. He worked as an internal consultant and helped optimize the hospital’s functions. He enjoyed his experience at Boston Children’s and realized he wanted to work in the healthcare space in the future.

After graduating this May, Gehrke plans to return to Disney in Anaheim to work as an Industrial Engineer. While his end goal is to return to the healthcare industry, he believes that with Disney he will be able to develop his skills more optimally as an industrial engineer.