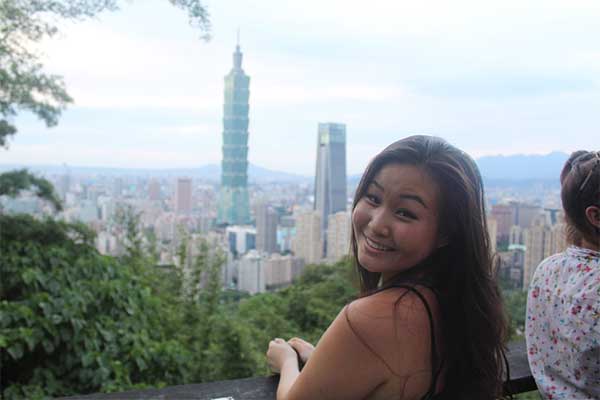 Angela Tsuei is a fifth-year Honors student at Northeastern University graduating in May 2022 with a bachelor’s degree in Industrial Engineering and a master’s degree in Engineering Management.

When she first started at Northeastern, Tsuei was originally pursuing a degree in Bioengineering with a concentration in biomedical devices. She was interested in working in the healthcare industry because she has a passion for helping people and wanted to make an impact on the lives of patients. However, she learned that she was not interested in lab work, and while she still wanted to work in the healthcare industry, she knew that bioengineering was not for her.

Fortunately, Tsuei attended the Industrial Engineering freshman forum run by Teaching Professor Beverly Kris Jaeger-Helton, who was then Galante Engineering Business Program Director. For Tsuei, Industrial Engineering was the perfect fit because, unlike other engineering programs which have a high technical focus, industrial engineering develops engineering skills along with business acumen and social skills. The intersection of business and engineering intrigued her, and its wide applications meant that she would still be able to work and make an impact on the healthcare industry without being in a laboratory setting.

During the summer of 2019, she decided to participate in Northeastern’s Dialogue of Civilizations, a specialized set of study abroad programs. The Dialogue she participated in was in Taiwan, where she learned about systems thinking for advanced delivery systems. In Taiwan, she had the opportunity to take a simulations course and collaborate with universities and hospitals. Tsuei also had the opportunity to work with other industrial engineering students in the dialogue, some of whom were in the Galante program. As she was already interested in applying for the Engineering Management combined master’s program, living closely with these students was influential in deciding to join the Galante program as well.

Tsuei officially joined Galante in February 2020, although she had attended events in 2019 as a prospective student. Since joining Galante, she gained critical leadership and communication skills that made her more comfortable with networking and public speaking. The Galante program gave her exposure to potential career paths and opportunities and served as a preparatory program for management.

Tsuei is an active member of the Galante program with her role as Mentorship Program Coordinator. Galante’s mentorship program is a fundamental piece that supports the culture and vision. She is responsible for pairing Galante mentees with experienced Galante fellows. She uses background information gathered from both mentors and mentees to make the most effective pairings that would be beneficial to both parties. Throughout the semester, Tsuei checks in with the pairings to monitor progress and program development. As a mentor herself, she contacts her mentees regularly, having become close friends with them. She recently expanded the mentorship program to include prospective Galante fellows. This expansion promotes early involvement in the Galante program, further enriching its depth.

In addition to participating in the Galante program, Tsuei has completed three co-op rotations. Her first co-op was with Wayfair as an inventory planning analyst, which gave her crucial professional experience and technical knowledge. Her second co-op was at Boston Children’s Hospital as a continuous improvement consultant, and her third co-op was with Brigham and Women’s hospital as a process improvement consultant. It was at her final two co-ops where she not only had the opportunity to work in the medical field but also in a career path that she was interested in. Consulting – more specifically continuous improvement consulting – allowed Angela to work on projects that worked closely with front-line staff and employees to optimize internal functions. Internal consulting was more attractive to her than other consulting jobs because it was intimately involved with the organization’s growth, allowing her to develop relationships with the employees within it. Additionally, because she would be consulting within the organization of the company, any connections that she made or changes that she implemented would have an impact on her future projects.

In her free time, Tsuei enjoys photography and cooking. She recently looked through old family albums which brought her back to memories that she had forgotten about, and she strives to capture new moments that she can look back to in the future. Inspired by sentimental images, she has also been reflecting on her heritage through cooking. She enjoys cooking foods from different cultures and comparing their flavors and ingredients, but one cuisine that she has put particular focus on is Chinese cuisine. Tsuei has been learning new family recipes to connect with her grandparents and extended family in China and immerse herself in her family’s culture.

She is currently working part-time with Straumann Group dental manufacturing company as a business excellence consultant. In summer 2022, she plans to travel to Europe and explore new and unique cultures as well as the rich history. After graduation Tsuei aims to find a career in continuous improvement consulting in the healthcare industry.