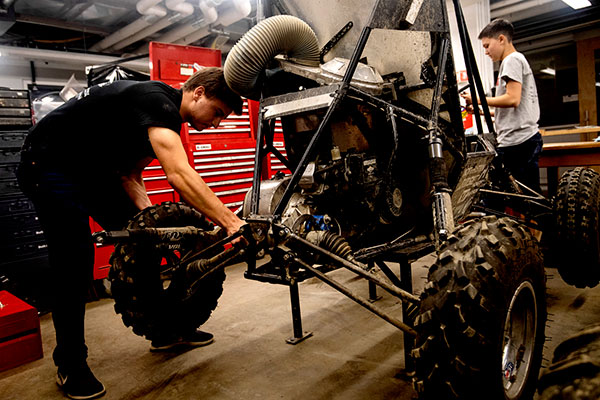 Northeastern’s Baja SAE team design and build their own all-terrain cars from scratch to compete in international off-road racing competitions.

Roll bars and dented fenders: How to hit 35 m.p.h. on a lawnmower engine

Who would have guessed that a race car is being built in a hushed, gray building devoted mainly to classrooms and administrative offices?

In another six months that car—a small skeletal cage powered by a one-gallon tank atop a 10-horsepower lawnmower engine—will be leaping hills on a motocross-styled course in Arizona, and as the mud splatters his goggles at 35 miles per hour, it will be all Filip Adamowicz can do to keep from flipping upside-down.

This is the airborne, rocketing, daredevil dream that is driving Adamowicz and his fellow Northeastern students to create that car—their car—entirely from scratch.

In their repurposed basement garage, the students have identified every part they will need to build their car. They are currently designing those parts in meetings at an adjacent conference room of long plastic tables pushed together, where they fill whiteboards with equations and missions worthy of a science lab.

“We’re here 40 hours a week,” says Adamowicz, president and co-captain of Northeastern’s student-run Baja SAE, so named after the off-road competition that has become his obsession. “But it can be 50 or 60 hours—sometimes more during build season.”

The plan is to begin building the car in mid-to-late November. For now, the two-dozen members of the Baja team are designing the 2020 model of the all-terrain vehicle that they will enter this spring in three races conducted by the Society of Automotive Engineers, or SAE.

Up to 141 cars from universities around the world are entered in Baja SAE events in the U.S. and other countries. SAE judges inspect the cars to ensure that the engines (which cost $250 with the organizer’s discount) have not been modified and that all safety standards have been met.

Students teach themselves how to design, build, and assemble almost every piece of the car. Photos by Matthew Modoono/Northeastern University

Northeastern’s Baja SAE team has been in the not-for-profit business of designing, building, and racing its own car since 1985. The club operates like a cyclical engine: Freshmen learn how to make and design individual parts; as sophomores, their education is reinforced when they are assigned to teach the next class of freshmen. So has the team churned out generations of self-made engineers.

Emily Kerr, a fourth-year mechanical engineering student who co-captains the team, was assigned to work on brakes as a freshman.

“We heat-treat the [brake] rotors in house,” she says. “The captain sat me down and explained what was happening chemically to the metal when you heat-treat a rotor. And then I took material science, and they showed all the graphs and talked about that exact same thing, and I was like, ‘Oh, I know this already.’ I’ve had that happen a couple of times in classes, where something that I had learned through Baja comes up again.”

“It’s really satisfying to drive something that you worked on,” Adamowicz says. “And it can be scary the first time you roll over, or hit a tree.”

He rubs the front bumper of the 2017 car, which has been indented like a broken nose.

“This is from hitting a tree this weekend,” he says, smiling.

The Baja students earn their understanding—and sense of ownership—for the inner-workings of the car. Photos by Matthew Modoono/Northeastern University

The team received $14,000 this year from the Student Government Association, and another $7,500 from Northeastern’s Department of Mechanical and Industrial Engineering. Team members raise the remainder of their $45,000 budget from 23 sponsorships, which involves making presentations and developing relationships with corporations. Adamowicz and his teammates spent a recent Friday at the suburban-Boston headquarters of their leading sponsor, Bose, whose employees took turns driving two Baja cars in a clearing on the corporate campus. (It helps that the primary contact at Bose was a Baja captain in 2007.)

In addition to donations of money, some sponsors agree to fabricate car parts to specifications drawn up by the Baja team, which is responsible for building everything except for the engine, wheels, shock absorbers, master cylinders, and seat belts, as well as small pieces like the fire-extinguisher mount and kill switches.

“All of the suspension members, the whole frame, the body panels, the seats, the seat cushions, the steering wheel, the steering column, the tire-steering system—we build all of it,” Kerr says.

Piece by piece, the students build and assemble the car that they will race in three events this spring. Photos by Matthew Modoono/Northeastern University

It’s easy to see why sponsors are interested. Each car looks like something from a Mad Max movie, with its small spiky tires and suspended seat and sleek confining frame. The SAE’s 129-page manual calls for drivers to wear fire-resistant vests and arm restraints, which are especially helpful when the car flips.

Adamowicz knew little of cars, and was no fan of auto racing when he signed on with Baja four years ago. He doesn’t know where his career will lead him after he graduates in mechanical engineering this spring. But he is looking forward to racing the soon-to-be-built car in SAE competitions at Tucson, Arizona, in April; at Louisville in May; and at Peoria, Illinois, in June. At each site they’ll be competing in dynamic events that test the car’s acceleration, maneuverability, and suspension, in addition to the main event: A four-hour endurance race along a hilly, motocross-styled course.

Someday, Adamowicz hopes, he will be the owner of their upcoming car.

“Eventually,” he says, “the car goes to the captain.”

But he’ll have to wait four to five years. What he and his team are designing now will be used by future generations to build a better car of their own, in the austere and greasy basement that has become his second home.