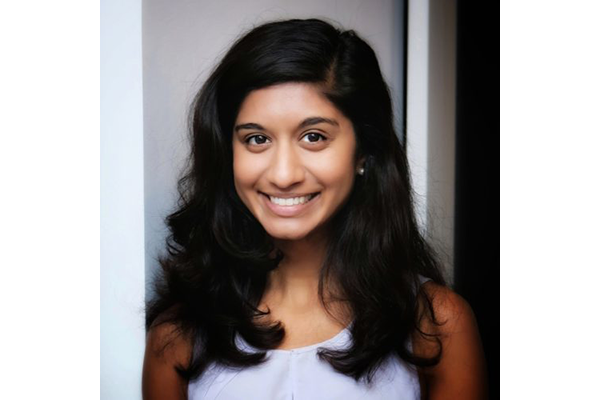 While data science has not always been on her radar, Data Analytics Engineering student Aparna V. Alavilli, ME’20, said that her passion for it initially began with running.

A competitive runner at Carnegie Mellon during her undergrad time, Alavilli explained that she would track different variables with her running, like mileage, distance, and which shoes she was wearing. She would then analyze her training log and try to find key indicators for good performances and look for areas where she could improve.

“After completing my Bachelor’s in Mechanical Engineering, I knew I wanted to further my education,” Alavilli said. “I really liked the program I found at Northeastern for Data Analytics Engineering, since it was one of the only data programs that I found that was housed in the College of Engineering and department of mechanical engineering, rather than computer science or data science. I wanted to apply data skills to engineering problems.”

Alavilli was recently awarded the Outstanding Graduate Student Award for Experiential Learning. Winners of the award “have shown an extraordinary capacity to integrate academics and professional work and establish themselves as emerging leaders in their field.”

Alavilli earned the award through her journey to New Balance, where she started initially as an innovation engineering intern. She applied “dozens of times” but didn’t hear back until she started at Northeastern.

Her first five months at New Balance required balancing work, class, and competing on the Northeastern track and field team. Alavilli woke up for practice as early as 5 a.m. and then had a 1.5-hour commute to New Balance, where she would often work until 6 p.m. or 7 p.m. After that, it was time to study for her full course load.

Her position has since morphed into a permanent role as the company’s first data scientist.

“I’m responsible for driving digital and footwear innovation through data insight across the domestic product development teams,” she explained. “I help different teams make data-driven decisions to improve on ends, whether it’s from a design perspective, manufacturing, or trying to better understand our consumer.”

“One of the most rewarding experiences has been working on a shoe for some time and then see it get released to market,” she said. “It’s a culmination of a lot of hard work from many different teams, and highlights the success that came from our efforts.”

When it’s more than just running

There are always multiple, interesting projects happening at New Balance, Alavilli added. Design, engineering, data, and distance running are all meshed together.

“It’s exciting to see new products in the works that I would actually want,” she said. “Additionally, they have initiatives to help support running and sports in general.”

The New Balance working environment is unique because as an engineer and data scientist, Alavilli said she can regularly collaborate with numerous specialties. For example, there are biomechanics experts, fit & wear, artists, marketing specialists, and other engineers.

“You get to see the product through a bunch of lenses when you work with all the different people, which is neat to see,” she said.

In terms of her future with data analytics, Alavilli is open to numerous opportunities, as long as she can continue to learn and grow.

“The field is always rapidly changing, so I want to be able to monitor industry trends,” she said. “I hope to one day own a business. I know that my engineering and data skills will help make that possible.”

Data Analytics Engineering student Aparna V. Alavilli, MS’20, was awarded the Outstanding Graduate Student Award for Experiential Learning. This award recognizes graduate students who have shown an extraordinary capacity to integrate academics and professional work and establish themselves as emerging leaders in their field.

One of Aparna’s strongest assets is her ability to take an academic concept and modify it to suit an industry’s needs, as evidenced by the success of her master’s co-op. As an innovation engineer at New Balance, a position that melded her passions for engineering, data, design, and distance running, she was instrumental in digitizing the additive-manufacturing-process monitoring for manufacturing commercial 3D components for consumer products. She had the rare opportunity to work on an end-to-end data analytics pipeline, where her contributions at each step were invaluable. She automated the data collection process and also created an automated visual analytics dashboard and predictive analytics dashboard, which directly helped process managers predict the quality of fabricated parts and machine health. Aparna’s digital solutions are now an integral part of the additive manufacturing process at New Balance, and she has been given a permanent role as the company’s first data scientist.