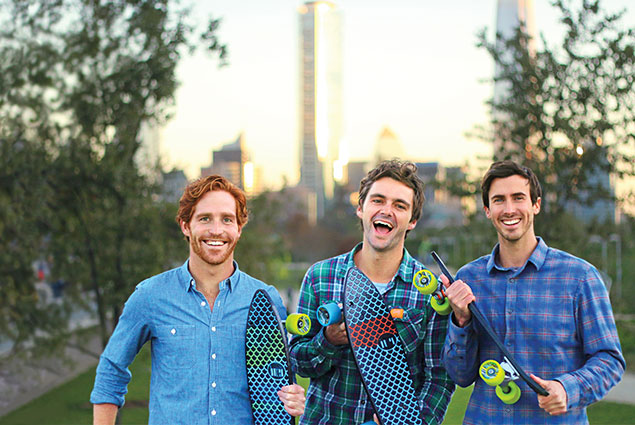 In his teens and 20s, Ben Kneppers, E’07, BS Mechanical Engineering, traveled the world searching for the perfect wave. Over the years, he and fellow surfers noticed that trash accumulating in the ocean was getting worse. So when Kneppers—a sustainability consultant—and friends David Stover and Kevin Ahearn began thinking about a business to launch, the idea came easily: Convert ocean plastics into a product.

“We all had great careers working for good companies, but we weren’t finding much meaning in it,” Kneppers says. “We thought, ‘What if we could set up the infrastructure to prevent ocean pollution by upcycling the plastics into products with a purpose?’”

Manufacturing surfboards seemed like the obvious solution—but they’re made of foam and fiberglass, and they require a specific weight to be aerodynamic. Instead, Kneppers chose to make plastic cruiser skateboard decks, which contain a type of plastic also used in fishing nets, a common form of ocean pollution. Fishermen often discard old nets in the ocean, where they can entangle and kill wildlife.

“Having a great idea is one thing; making it real—turning it into a business—is a different story.”—Ben Kneppers, E’07

Kneppers and his friends wrote a business plan with help from IDEA, Northeastern’s student-led venture accelerator. In 2013 and 2014, they built a skateboard and launched their Chile-based company, Bureo, using funding from IDEA, a Kickstarter campaign, and the Chilean government. The name means “the waves” in Mapudungun, a language of pre-Columbian Chile. Bureo pays fishermen along the Chilean coast to donate, rather than discard, their old fishing nets. In 2014, outdoor-gear company Patagonia invested in Bureo.

Since then, the company has grown steadily. It has added sunglasses and skateboards, and a flying disc to its product line. It has partnered with the design and manufacturing firm Humanscale to create and offer an office chair. And in September, Bureo will launch Jenga Ocean, billed as “the first Jenga set made from 100% recycled fishing nets.”

The joys of building a business outweigh the day-to-day frustrations, Kneppers says. He recalls a period last year when Bureo was developing a new iteration of its skateboard. The prototype had taken months to perfect, but it was still cracking unexpectedly. The team went back to the drawing board and corrected the problem.

A startup, says Kneppers, “has to be something you’re passionate about—something you live, eat, and breathe. Having a great idea is one thing; making it real—turning it into a business—is a different story.”