A Fork in the Road 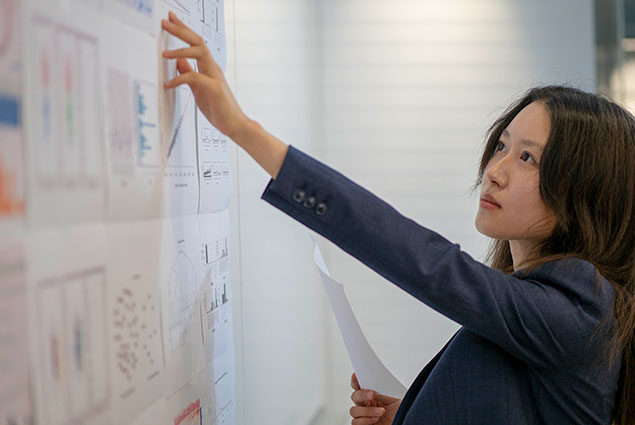 Zhuohan Yu, MS, Data Analytics Engineering 2021—It’s a lot easier to pick a career path when you first enter school and follow it. It’s harder to find out along the way that what you’re studying isn’t what you want to be doing. The hardest part is deciding to change your path and starting a new journey after all the accomplishments you’ve already worked hard for. That’s how it was for Zhuohan Yu, a current Data Analytics Engineering Masters student who has had a long but fruitful journey on her way to Northeastern University.

Yu, who is from Heilongjiang province in northeastern China and got her bachelor’s degree in Thermal Energy and Power Engineering China University of Petroleum in Beijing, says that Boston’s weather helped remind her of home when she first got here.

“I like Boston because it’s like my hometown. There is a lot of snow,” said Yu. “It’s very different from the weather in California.”

After finishing her undergraduate degree, Yu worked as a junior engineer and served as the president/co-founder of her former school’s alumni association, before coming to America for more school. She received her first master’s degree in Mechanical Engineering from The University of Southern California but knew during her time there that the path she was on wasn’t right for her.

“I realized that I’m not so interested in getting Phd degree in mechanical engineering, a lot of Chinese parents want their children to go into it,” said Yu. “I chose data analytics because whether you’re in America or China, data is very popular and everyone is talking about big data and artificial intelligence.”

It lets her do two things at once that she likes to do in the classroom and professionally: coding and communicating with others.

“Data analysis is combined, you can communicate with others and think about what you want to do, and the other half you’re coding. It’s the best combination for me,” said Yu. “The program is very flexible.”

Just like many other students, the co-op program was one of the biggest factors for Yu when it came to selecting a new university. But that was not the only thing that drew her in.

“The thing that I love at Northeastern is that they really care about each student’s career. I didn’t get as much guidelines about what you should do after graduation at USC,” said Yu.

Her experiences in the classroom had a big impact on what she ended up doing when it came time for co-op, and it also helped her get them.

“I took a course with Professor Sagar Kamarthi. During his class, he taught us a lot about data mining,” said Yu. “I used the project we did to get offers while seeking co-op, and the companies I showed it to were really interested in it. I think it made me stand out better as an applicant.”

Yu ended up doing her co-op at William James College, where she worked as a Research and Evaluation Associate. She analyzed data relating to mental health. But, her work and studying is far from over.

“When I first enrolled I studied hard and learned as much as possible, because data is hard. The background I came from is similar but different. I was thinking about how I could use it in real life,” said Yu. “One day, I want to be a data scientist. I’m not currently qualified, but I’m still working hard and trying to catch up with my peers.”