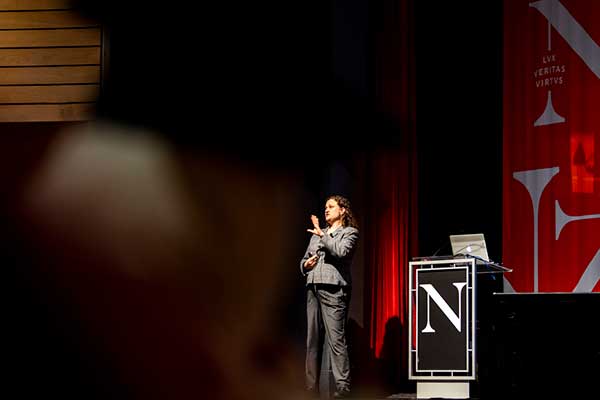 MIE Teaching Professor Bridget Smyser spoke to the graduating class during the “Last Lecture” series on the importance of doing what works for them and that it is not always a straight path.

What do horror movies have to do with mechanical engineering?

“If you ever walk by my office and hear blood curdling screams, that’s just me grading,” said Bridget Smyser, teaching professor of mechanical and industrial engineering.

It’s not the grades that induce the screams, to be clear—it’s Smyser’s thoroughly researched, experimentally sound grading technique, which she explained to a full house in Blackman Auditorium on Wednesday, during the university’s Last Lecture event.

The ceremonial final lecture for the graduating class is fashioned after the traditional “last lecture” delivered by beloved retiring professors popularized at Carnegie Mellon University in Pittsburgh. The idea took off in the mid-2000s, after Randy Pausch, a professor at the university who discovered he had terminal cancer, delivered his last lecture there. Pausch’s lecture was turned into a book titled “The Last Lecture” that became a New York Times bestseller in 2008. Since then, universities across the U.S. have adopted a last lecture series for graduating students, as well.

Smyser’s lecture on Wednesday marked Northeastern’s second year hosting the event. In 2021, it was delivered by Rebecca Shansky, associate professor of psychology at Northeastern.

Back to the screaming (almost).

Smyser has “always been an experimental type of person; very hands-on,” she said. She’s taken that experimental approach to her teaching and learning—and to her life.

Growing up in Chicago’s East Side, Smyser knew she wanted to go to college, but didn’t have a lot of context for what that might entail. Her great-grandmother immigrated to the U.S. from Poland without any formal education, and each matriarch after her achieved a bit more. Her grandmother had to drop out of school in eighth grade to care for her younger siblings, her mother had a high school diploma, and not many people in Smyser’s neighborhood had an advanced degree.

Still, Smyser was encouraged by an entourage of teachers and family members to give it a shot—and did she ever. Smyser got a bachelor’s from the Massachusetts Institute of Technology, then skipped over a master’s and went straight for a doctorate from the Worcester Polytechnic Institute.

She started teaching at Northeastern in 1999 as an adjunct professor, and became a full-time teaching professor at the university in 2010.

However, none of this was ever in her plan.

“If you had told me, back in high school, that I would become a professor, I would’ve laughed you out of the room,” she said. “I just didn’t think that was for me.” But following along this unexpected journey taught her lessons that she passed on to graduating students: Don’t expect a straight path, and when someone believes in you, listen to them.

Smyser rattled off a list of people that extended from her grade-school science teacher (Carol Katzberger) to her former supervisor and mentor at Northeastern, professor Hameed Metghalchi, who encouraged her to take risks and push forward.

Indeed, it was Metghalchi, the department chair of the Mechanical and Industrial Engineering Department at the time, who suggested that Smyser apply to lead the Measurements and Analysis Lab—a required course for mechanical engineering students at Northeastern.

Smyser was uncertain, but applied at Metghalchi’s prodding, and has successfully led the lab for more than a decade. The course, which badly needed updating (the syllabus required students to bring a floppy disc to class in 2010) also turned out to provide another lesson that Smyser shared with students: Find things that need fixing, and work hard to fix them.

“If you had told me, back in high school, that I would become a professor, I would’ve laughed you out of the room,” said Bridget Smyser while giving the Last Lecture to graduating seniors in Northeastern’s Blackman Auditorium. Photo by Alyssa Stone/Northeastern University

Applying best practices for hands-on teaching, Smyser reconfigured the entire course, tweaking lessons and experiments based on feedback from students in the lab each term. She tracked their reported engagement in the experiments and their frustrations, and worked tirelessly to increase the former and decrease the latter. Smyser published her own research in the American Society for Engineering Education journal to report out her process and its success.

Smyser had to overhaul the lab yet again in 2021, when public health measures to mitigate the spread of COVID-19 sent students home to learn remotely.

“The things that really need to be fixed usually are not easy to fix,” she said.

Smyser took her own advice when, after being diagnosed in her 40s with attention-deficit/hyperactivity disorder, better known as ADHD, she set about experimenting with ways to grade her students’ lab reports—a task she enjoyed but from which she found herself easily distracted—more efficiently. Her expanded role running the lab meant that she had more students’ work to grade, and she needed a better way to do it.

Being the experimental person she is, Smyser applied an engineering design process to the problem.

She identified the problem: “ADHD plus expanded duties equals constantly behind,” she said.

She understood the needs: Any solution had to be one that was applicable both in her office and at home, because she graded papers in both places.

She brainstormed solutions: mindfulness meditation, clearing off her workspace, listening to background noise, using a dart board to assign grades at random.

She evaluated the possible solutions: Mindful meditation only went so far; Smyser couldn’t totally clear her desk because she had books and papers she needed; and throwing a dart was out of the question if she wanted to keep her job (she did).

Finally, she experimented with background noise. Total silence left too much space for her own thoughts to roam free, white noise was either annoying or so deep in the background that it was as good as total silence, music was too distracting.

Smyser did, ultimately, find something that worked: “Bad found-footage horror movies,” she said.

Back to the screaming (for real).

The formulaic movies were predictable enough that Smyser didn’t need to focus too closely to know what was going on, but they were entertaining enough to keep her brain occupied, she said.

“Life is experimental and open-ended,” Smyser said to the graduating students, a few of whom were wearing their Commencement regalia in the audience. “I hope that you all find that person who believes in you, and listen to them. Find things you can contribute to, because it will be so worth your while.”