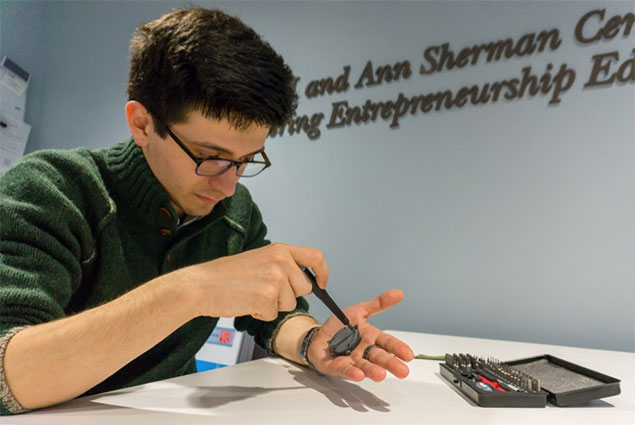 Carlos Fuentes, BS Mechanical Engineering and Physics 2018, balances a job at Amazon with a startup born of his passion for vintage timepieces

For his sixteenth birthday, Carlos Fuentes, E’18, received an unusual gift from a family friend: a broken vintage watch movement. “My dad’s friend knew I was enamored with mechanical stuff,” explains Fuentes. “I’d always loved watches and their tiny moving parts—all the gears and the springs. From a very young age, I’d always wondered, ‘Wow, how does this work? How can this collection of parts keep time accurately?’”

After fixing the movement by designing and making a new spring, Fuentes bought a dial, a case and other components—learning a lot about the global business of watches. As a University Scholar with a full tuition scholarship, Fuentes brought the watch with him when he arrived at Northeastern a few years later.

“I initially declared a major in physics because I enjoy studying why things work,” Fuentes explains. “But I missed the hands-on aspect—I also wanted to learn how things work. So I added a second major in mechanical engineering, and it was the perfect outlet for that desire to take things apart and put them back together.”

Fuentes’ passion for mechanical systems led him to a co-op at Amazon Robotics in his third year. There, Fuentes and a group of fellow students developed a new robotic arm design capable of picking specific products from a bin, based on their size and shape.

“It was an engineering problem that had plagued Amazon for a long time,” recalls Fuentes. “We saw that it would have a huge pay-off in terms of saving time and money. This project not only fulfilled me as an engineer, but also showed me that engineers can do more than solve technical problems—they can support financial results and create a real competitive advantage.”

Back on the Northeastern campus, Fuentes had been hearing a lot about engineers and entrepreneurship. “There were all these programs like IDEA, Generate, and the Sherman Center, which reflected Northeastern’s growing support for merging engineering and business,” says Fuentes. He became a project leader at the student-run Build studio, part of the College of Engineering’s Generate program—where he helped other founders solve product-related technical problems. He also became a technical analyst for Northeastern’s IDEA program, helping to choose student-led projects for funding based on their product’s technical merit.

Fuentes also used the opportunity to combine his passions for watches and mechanical engineering to develop a new product: a vintage-inspired watch produced via modern manufacturing methods. He did much of the research and development himself and was awarded funding through Northeastern’s entrepreneurial ecosystem, as well as through the Scholars Independent Research Fellowship.

All the while, Fuentes continued to work for Amazon Robotics and, upon graduating last year, he moved to Seattle to work for Amazon as an automation hardware engineer. Notes Fuentes, “I replicate product designs in the virtual world and make recommendations about how to improve them. It’s very rewarding, as it ties directly to my love of problem-solving.”

Equally gratifying, Fuentes continued development of his watch design and founded Fuentes Watch Company. He hopes to launch his first design, the Bethany, later this year.

“What I learned at Northeastern is to believe in myself and follow my goals, no matter how nontraditional they may seem,” Fuentes says. “’If you look at my path—physics, engineering, robotics, watches, entrepreneurship—it might make absolutely no sense to others. But it makes perfect sense to me.”