Luzzi Named 2020 Fellow of the National Academy of Inventors 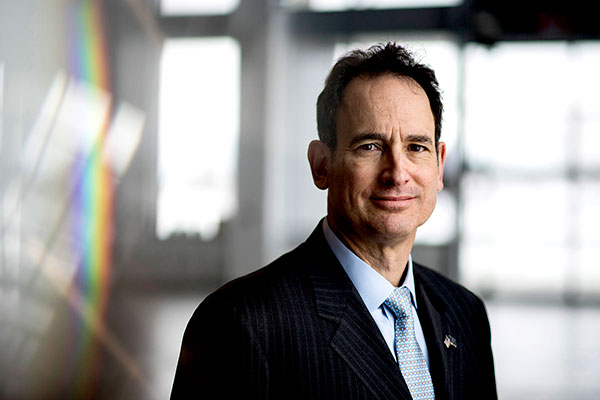 David Luzzi, senior vice provost for research and vice president of the Innovation Campus at Burlington, and professor of mechanical and industrial engineering, has been named a 2020 Fellow of the National Academy of Inventors (NAI).

David Luzzi, an academic leader in innovation for more than two decades, has been elected a fellow of the National Academy of Inventors for his work creating and facilitating inventions and improving universities as research partners.

“It’s a great honor to be recognized,” says Luzzi, who is also the senior vice provost for research and helped lead the development of Northeastern’s Innovation Campus.

“It’s also a credit to the founders of the NAI for recognizing that entrepreneurship and innovation coming out of universities provides tremendous value to the nation and world and needs to be celebrated and fostered,” he says of the Tampa-based organization.

The Innovation Campus in Burlington, Mass., brings together universities, corporations, and government agencies to accelerate the transition of research and development to commercial and military technologies.

It is home to the Army Research Laboratory, U.S. Air Force programs, and the George J. Kostas Research Institute for Homeland Security (KRI) — which Luzzi created with Northeastern alumnus Kostas in 2011.

Partners ranging from a two-person startup to corporations with more than $60 billion in annual revenue are present on campus. As the head of the KRI, Luzzi manages its relationship with its corporate partners, for which KRI provides programs in areas such as cybersecurity and advanced manufacturing.

The campus also boasts the Biopharmaceutical Training and Technology Lab, which spun up a fully-licensed viral-testing lab in just six weeks, the Life Science Testing Center, to provide coronavirus testing for Northeastern. The state-of-the-art facility is key to the university’s efforts to ensure the safety of the Boston campus and its surrounding communities.

Luzzi recognized early in his career the challenges that universities face in transitioning their inventions and discoveries. “There was a growing awareness of the need to improve the way that universities engage with the outside world in terms of transition of technology,” he explains.

One of the biggest patenting hurdles facing universities is the sheer breadth of the subject matter. “Universities cover every subject under the sun,” Luzzi says. Companies, on the other hand, are more focused and can target their investments.

He points to IBM, which typically leads tech companies in the number of patents it files every year. The Armonk, N.Y.-based giant has received more than 150,000 U.S. patents since 1920 for innovations ranging from magnetic storage to laser eye surgery, yet with more focus than a top research university.

But, Luzzi explains, universities struggle to produce strong patent positions. “We typically are only able to patent one or two things around a particular technology,” he says.

Patents are important for a university because they provide the protection needed for companies to accept the risk to further develop and bring new discoveries to market, he explains. Funding for continued development is another hurdle.

Private companies can prioritize projects with potential and provide a steady flow of research and development funding. Universities, however, depend on the government for funding, which can be less predictable because of the government’s focus on new discoveries and early-stage research.

“It is harder to get government money to fund technology past the initial excitement of the new discovery phase,” says Luzzi, who was a member of the U.S. Air Force Scientific Advisory Board and served as its Science and Technology Chair.

That, in turn, gave birth to the realization that universities needed to get better at partnering.

“We have always had a challenging relationship with industry in terms of understanding how to produce a mutually positive return on investment,” Luzzi explains.

Lessons learned eventually paved the way for the creation of the Nanotechology Institute in Philadelphia, the first nanotech institute in the country, which was focused on the convergence of nano- and bio- technologies.

“We had 13 universities and research centers all pooling their nanotech intellectual property (IP) under one roof, and that enabled us to put together pools of IP that could create better value propositions for entrepreneurs,” says Luzzi.

When he later joined Northeastern he brought that successful model to Burlington, where there government, university, and industry work together in what Luzzi describes as a “very strong innovation ecosystem.”

Luzzi plans to use his new platform at NAI to share these successes nationally, and to tell Northeastern’s story.

“I plan to promote our up-and-coming inventors, entrepreneurs, and innovators at Northeastern aggressively to the NAI,” he says.

“If you’re going to go into upper administration in academia,” Luzzi explains, “the success of your colleagues is what you’re striving for. And that’s something that has always been the way I felt about things here at Northeastern.”