Levendis Selected as Fellow of the National Academy of Inventors 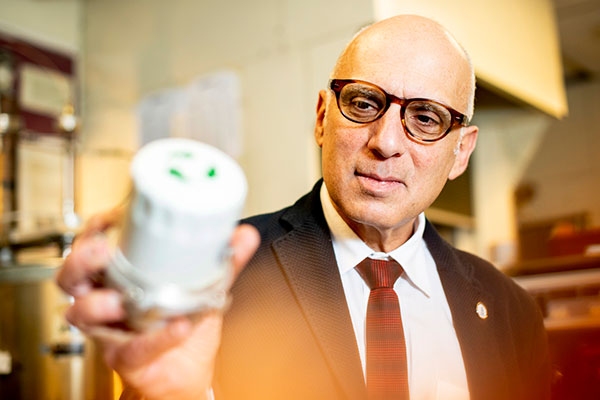 Yiannis Levendis, Distinguished Professor of mechanical and industrial engineering at Northeastern, focuses on creating reusable products, cleverly repurposing our waste, and lighting a remarkable number of things on fire.

Corn stalks and old plastic could be the new coal

Main photo: Yiannis Levendis, Distinguished Professor of mechanical and industrial engineering, has been elected a 2019 fellow of the National Academy of Inventors. Photo by Ruby Wallau/Northeastern University

At the beginning of the last century, there were 1.6 billion people living on the planet. Today, there are 7.7 billion of us.

“Not only are there more of us, but each of us consumes more than we did back then,” says Yiannis Levendis, Distinguished Professor of mechanical and industrial engineering at Northeastern. “That’s why we have all these problems with competition for resources, air and water pollution, global warming, wildfires, everything.”

Levendis was recently elected as a fellow to the National Academy of Inventors, an honor reserved for individuals whose inventions “have made a tangible impact on quality of life, economic development, and the welfare of society.” He has spent his career creating reusable products, cleverly repurposing our waste, and lighting a remarkable number of things on fire.

On the left, a reusable oil filter designed by Levendis could eliminate waste from the millions of oil filters that are currently thrown away every year. In the center and right photos, Levendis and his colleagues use a specialized furnace to study the combustion of potential fuels. Photos by Ruby Wallau/Northeastern University

“We have all kinds of things that we burn,” Levendis says, gesturing to a specialized, tower-like furnace he built in his lab. “We’re looking to substitute coal with renewable biomass and waste biomass for fuel.”

When coal is burned, it releases a number of harmful pollutants, including mercury, arsenic, and other heavy metals, as well as gases that can cause respiratory problems or create acid rain. It also produces carbon dioxide and other gases that enter our atmosphere and act like a blanket, trapping heat that should radiate out into space and causing the planet to warm. Levendis is looking for alternatives.

Many of the potential fuels come from unused parts of plants such as corn or rice. The husks and stalks that we don’t eat could be burned as fuel. This would still release carbon dioxide, Levendis says, but since plants take in carbon dioxide as they grow, the total amount in the atmosphere wouldn’t change.

“Growing the fuel absorbs carbon from the atmosphere,” Levendis says. “Then when you burn it, it releases it back. So it’s a zero sum game.”

But what about pollutants? What else is being released when these plants are burned? Levendis has built two unique furnaces in his lab to find out.

Levendis and his colleagues use the first one to understand the combustion of different materials. They put in a single particle of pulverized rice husk, for example, and measure how quickly it burns and at what temperature.

In the second furnace, Levendis measures the gasses and particulates that are produced as streams of biomass particles burn.

“With that information, we can get an idea of how much energy we get out of it and how the temperature affects emissions,” Levendis says. “And we can see how to change the combustion behavior so we can affect the emissions.”

The emissions of a material can change depending on the speed and temperature at which it burns. Levendis is trying to find the cleanest way to get energy out of various biofuels.

One possible fuel source that is not from plant materials is waste plastic, Levendis says. By heating plastics to high temperatures without the presence of oxygen, Levendis and his colleagues are able to turn the plastics into a gas that burns cleanly. Most of the plastic turns to gas, and that gas can be used to grow carbon nanotubes—thin, strong structures that are being used to design flexible electronics and other new materials. The remaining gas can be burned for energy, just like natural gas.

But Levendis isn’t just focused on fuel. He has previously designed an environmentally friendly ceramic oil filter for cars, which can be removed, cleaned, and re-installed. It could eliminate the waste from the millions of oil filters that are currently thrown away every year.

And he is also looking at new ways to put out fires. The firefighting foams used on industrial fires pollute the atmosphere and contaminate groundwater. Levendis showed that a single cup of liquid nitrogen can put out square meter of burning diesel fuel, and then simply evaporate back into the air (our air is 78 percent nitrogen).

“Dangerous fires can be extinguished instantaneously with direct application of liquid nitrogen,” Levendis says. “And there’s no environmental damage because it vaporizes back to nitrogen gas immediately.”