He’s Traveled the World, from the North Pole to Antarctica—and Still Dreams of Landing on the Moon. 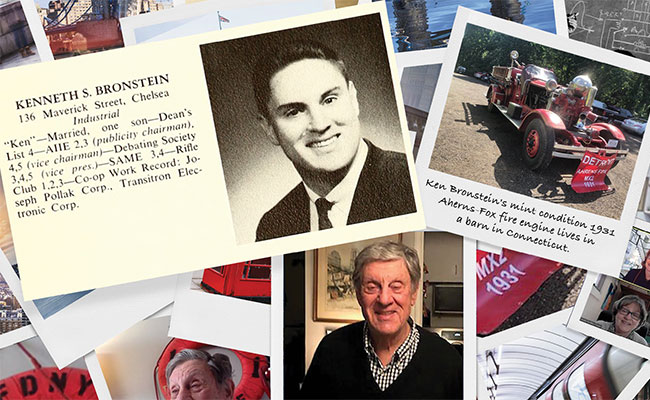 In 1956, during one of Ken Bronstein’s first engineering classes at Northeastern, a professor made predictions about what might change by the year 2000. The Space Race was on, and personal jet packs and regular trips to the Moon were a couple of the possibilities that sparked Bronstein’s imagination. He dreamed of embarking on a lunar journey, and today, he’s disappointed that technology hasn’t made it a reality for himself or many others—but other travels awaited him.

Raised in a family of small business owners, Bronstein, E’61, decided he would be the first to attend college. His father told him he didn’t need to earn a degree because he could learn from family businesses and “the school of hard knocks,” Bronstein says. But he wanted to explore the larger world, and his mother encouraged him. Interested in technology and engineering, he applied to Northeastern’s industrial engineering program, which gave him broad experience in electrical, mechanical, and civil engineering, as well as law and business.

Bronstein attended Northeastern for another reason that many of today’s students choose it: co-op. “The value of co-op was in the experience it gave me at different companies,” he says. He looked for co-ops at small, medium, and large businesses to help understand how different-sized organizations functioned.

After that co-op experience, he wrote a paper on the emerging field of semi-conductors. The paper was shared by one of his professors with IBM, which led to a job offer. Bronstein spent a satisfying and varied career at IBM in New York City for 37 years, interrupted by two years of service in the Army.

“At IBM, we were changing the world. We made contributions to it,” Bronstein says with pride. “Northeastern is very important to me because it started me on my career in engineering and business.”

Active in his retirement, Bronstein has a unique hobby: He loves all things related to firefighting and fire departments, and his collection of helmets fills a wall in his home. A vintage 1931 Aherns-Fox Fire Engine is kept safely in a barn and is the envy of other collectors. He’s even an honorary fire chief in New York City, where he resides. Bronstein travels extensively around the world and visits local fire stations wherever he goes, which has given him a global network of firehouse acquaintances.

When considering his estate plans, Bronstein is interested in organizations where people help people and he’s named several in his will, including Northeastern. The university was integral to his preparation for his life and career, and his gift will support the industrial engineering program, which he credits as “the foundation, the base of where I am today.”

Bronstein’s advice to students is simple and direct. “Don’t take the easy jobs! Choose ones that will challenge you,” he counsels. “Make your mistakes in your co-op job—not in the job after you graduate!”

Learn more about Ken and other legacy donors at plannedgiving.northeastern.edu