Helping to Bring Families Closer Together 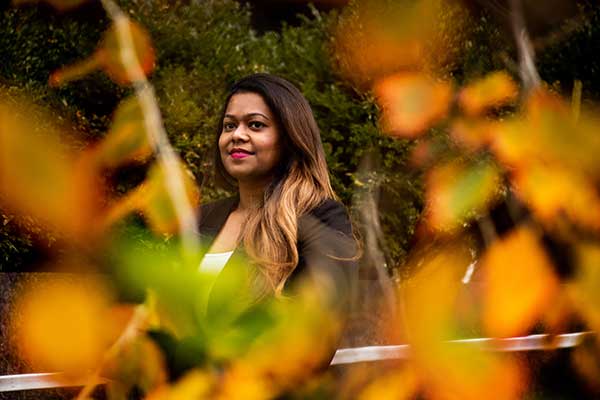 Data analytics engineering student Ravalika Kurumilla, ME’22, has been working on co-op at Ancestry.com to create algorithms to help customers find their family connections.

When Ravalika Kurumilla, in the second year of a data analytics engineering master’s program, was searching for her first co-op at Northeastern, she knew what she didn’t want: a work-while-you-learn opportunity that didn’t allow co-ops to live and bond together like a family.

“With most co-ops, you have to work only with the people in your department, but Ancestry has this rule that co-ops must stay together and get to know each other,” she says of Ancestry.com, the Utah-based family tree and genetic testing company where she has been working in data analytics.

Another perk that surprised Kurumilla was that the company provided living accommodations for several months in a nearby hotel as a place for co-ops to connect and socialize. “It helped us share experiences and motivated us a lot to work better, and it helped them by having all of us in the same place rather than scattered throughout the U.S.,” she says.

There were about 40 people of different nationalities from a variety of U.S. colleges and universities in her group. They were given mentors and managers to guide them through their time with the company during the summer of 2021.

“They knew what co-ops needed in terms of training, and that was really interesting,” says Kurumilla, who estimates that about 20% to 30% of co-ops eventually move into full-time positions at Ancestry.

Her in-person training in Utah later morphed into a remote co-op from Boston, where today she works on a variety of data science projects, including handwriting recognition. “We scan records and try to develop data science models using Python,” she says of a programming language commonly used in the field.

For every one or two data scientists, she explains, there are about 10 data science engineers who are constantly working to wring inefficiencies out of the model to make it work at peak performance. “It’s really important for engineers to make the model more efficient,” Kurumilla says.

The task is huge. Ancestry has millions of paying subscribers and an extensive collection of over 30 billion records and more than 20 million people, according to the company. More than 100 million family trees have been created for customers.

Kurumilla’s team doesn’t deal with DNA databases. That’s the function of the genealogy department. Kurumilla is on a team that manages non-digitized records such as family photo albums.

“We collect old records like family history books and try to create a family tree from that data,” she says of her role.

Ancestry made headlines in September when it released nearly 4 million digitized records from the Freedmen’s Bureau—a government agency created in the 1800s to help former slaves become self-sufficient. The free search tool was designed to help Black families learn about their ancestors’ lives after the Civil War, important since it can be difficult to track records of people who had been enslaved.

“The collection can enable meaningful family history breakthroughs because it is likely the first time newly freed African Americans would appear in records after Emancipation, as many enslaved people were previously excluded from standard census and federal documents,” the company said in a press release.

Kurumilla’s co-op wraps up at the end of December, and the positive work experience left her grateful for the lasting impression her co-workers had on her.

“I could reach out to anyone, they were all so supportive,” says Kurumilla, who grew up in India. “This is my first time working in the United States and it took me a couple of months to get used to the American working style.”

The co-op challenged her skills, particularly when she was given an important assignment—design an algorithm for a new program that will be seen by customers. She consulted with mentors and managers along the way before the software went into production.

“I was new to it and it was fulfilling to see the way it performed, especially since it was going to be used by real people. I’m proud of that.”