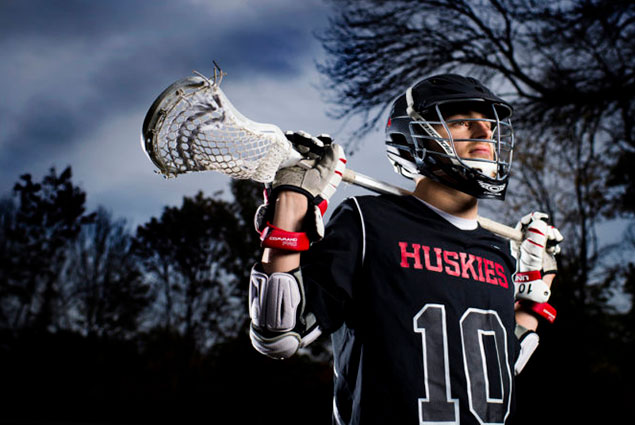 Ask Darryl Robinson, BS, Mechanical Engineering, 2020, why lacrosse is his favorite sport, and he’ll cite its unique blend of physicality and finesse, its reliance on teamwork over individual ability. “It’s the fastest game on two feet,” he’ll say, using one of the sport’s most popular slogans.

Robinson, E’20, grew up raking, scooping, and roll dodging in Northport, New York, where lacrosse, he says, is “the sport to play.” For the past seven months, he’s served as vice president of Northeastern’s club team, an ultra competitive outfit in the Men’s Collegiate Lacrosse Association’s Pioneer Collegiate Lacrosse League.

The Huskies reached the MCLA National Championships in 2017 and have even higher expectations for the 2018 campaign. “We think we’re going to have an awesome season,” says Robinson, an attacker. “The team has a lot of great new and returning players.”

This past summer, Robinson honed his game by participating in the Israel Premier Lacrosse League’s internship program. The eight-week experience afforded him the opportunity to play competitive lacrosse in Israeli cities while also coaching the next generation of expert clampers, cradlers, and goal-scorers. Robinson played for the Ashkelon Fighting Alephs, one of eight teams in the IPL. He scored three goals in eight games, helping his adopted team reach the league championship. When he wasn’t playing, he was coaching an under-15 team and hosting lacrosse clinics for at-risk 6-to-10-year-olds in the cities of Ashkelon and Sderot.

“My favorite part of the whole experience was meeting lacrosse players from all around the world,” says Robinson, one of approximately 100 collegiate players from 14 countries who participated in the summer program. Coaching was pretty fun, too. As he explained, “You have to teach by doing and offer encouragement.”

After the program ended, Robinson had an exit interview with the Israeli Lacrosse Association, the sport’s national governing body. It was then that he discovered that the ILA wanted to create a lacrosse program at a private college in Israel with the goal of competing in the Pioneer Collegiate Lacrosse League. Without hesitation, Robinson invited the college—Interdisciplinary Center Herzliya—to compete in the PCLL’s four-team Fall Classic on Nov. 18 at Parsons Field in Brookline, Massachusetts.

The Fall Classic will mark IDC Herzliya’s first-ever collegiate competition. As part of the event, the Israeli club will play Northeastern and New Hampshire. “I wanted to do as much as I could to stay involved in Israeli lacrosse,” says Robinson. “I’m looking forward to seeing if it can kickstart the program.”

On the academic side, the third-year mechanical engineering major is eagerly awaiting the start of his co-op as a quality engineer at Hasbro, where he’ll have the opportunity to develop new concepts for Nerf, Play-Doh, and Super Soaker products. He says that his dream job would combine his passion for lacrosse and engineering—and he’s confident he’ll find the perfect fit. “There are a lot of athletic companies that hire engineers as part of the design process,” he says.