From Capstone to MassChallenge Finalist 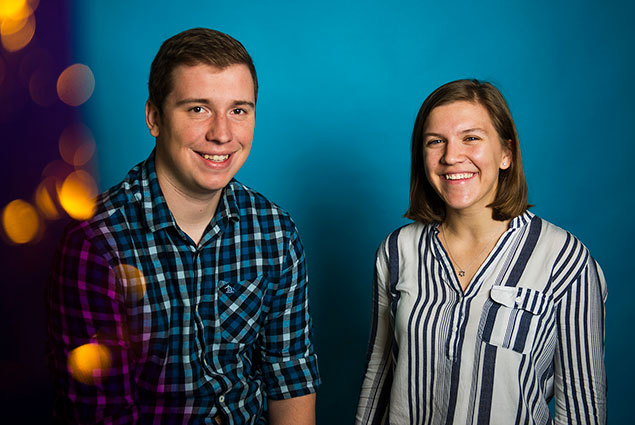 Two Northeastern graduates have launched a startup that offers a technological solution to easing the physical burden placed upon nurses and other caregivers working at hospitals and other healthcare settings.

The focus of their startup, Power Assist Solutions, is a detachable device that offers power assistance to a manually operated wheelchair, thereby reducing the energy healthcare workers need to exert to push patients from place to place. “There is a lot of physical activity in a caregiver’s shift, and we want to make one of the most physically demanding tasks easier,” said Louise Katzovitz, who graduated last month.

Katzovitz, who co-founded the startup with Martin Bujwid, said she got the idea for the device last summer while pushing her grandmother’s wheelchair at her brother’s college graduation in Colorado. From there, Katzovitz, Bujwid, and three other College of Engineering students—Max Sminkey, Thomas West, and Sam Levine—took on the project as their senior design capstone in the fall semester. The prototype features a set of two power assist devices—one for each side of the wheelchair—that provide up to a 50 percent power assist on a maximum incline of 5 degrees. The detachable device, which weighs less than 10 pounds, is mounted behind the armrest and concentrically to the spokes.Photo by Adam Glanzman, Northeastern University

In the spring semester, Katzovitz and Bujwid, both E’17, continued pursuing the project, developing a business concept focused on their prototype and immersing themselves in Northeastern’s entrepreneurial ecosystem. They joined IDEA, the student-run venture accelerator; participated in the Entrepreneurs Club’s Husky Startup Challenge and took second-place at Demo Day; and pitched their business concept at the Biotech Entrepreneurs SEED Competition. Power Assist Solutions won the competition, taking home $10,000 in funding from by the university’s Mosaic Fund. (Mosaic is an alliance of student-led organizations that support venture incubation at Northeastern, and the fund was created in 2015 to make grants that support the interdisciplinary interaction between these student-led organizations.)

Last week, Power Assist Solutions learned it was one of 128 early-stage startups out of some 1,600 applicants worldwide accepted into the 2017 MassChallenge Boston accelerator program. Startups are provided access to industry partners and mentoring opportunities as well as to MassChallenge’s co-working space in Boston’s Seaport district. The program culminates in November, when the most promising startups compete for shares of more than $1.5 million in equity-free awards.

Katzovitz said getting into MassChallege is a game-changer for Power Assist Solutions, not only because she and her business partners will have access to working space and invaluable networking and mentorship opportunities, but also because they plan to take advantage of MassChallenge’s research and development lab to build additional prototypes of their device.

Katzovitz said that Power Assist Solutions is currently focused on the healthcare market. But she pointed to a range of other potential markets to target in the future, from airports and sporting venues to zoos and amusements parks, were wheelchairs are often in abundance. “We want to create additional prototypes and get them in the hands of people at hospitals or other healthcare settings, so they can start seeing the impact,” Katzovitz said.

The prototype features a set of two power assist devices—one for each side of the wheelchair—that provide up to a 50 percent power assist on a maximum incline of 5 degrees. The detachable device, which weighs less than 10 pounds, is mounted behind the armrest and concentrically to the spokes. The upper portion contains a quick release handle and clamp system, allowing for quick installation of under 15 seconds.

Katzovitz also noted that the team designed the device so it would not interfere with other medical equipment patients in wheelchairs might need, such as an IV poll or an oxygen tank hooked onto the back of the wheelchair.

Katzovitz also credited Northeastern faculty members who have been critical to their success. She thanked their advisor, associate professor Andrew Gouldstone, for spending hours and hours meeting with them from the beginning. “He has been essential to our progress thus far,” she said. She also underscored the importance of assistant professor Randall Erb encouraging them to apply to MassChallenge.

“I was blown away with the engineering design, device functionality, and operator usability that were very clearly embodied in Louise’s and Martin’s prototype,” Erb said. “On top of this, the device looked great, like a market-ready version. And the market they have identified is compelling and in need of disruption. Further, and perhaps most importantly, Louise and Martin have the intelligence, tenacity, and humility required to be successful at a startup.”