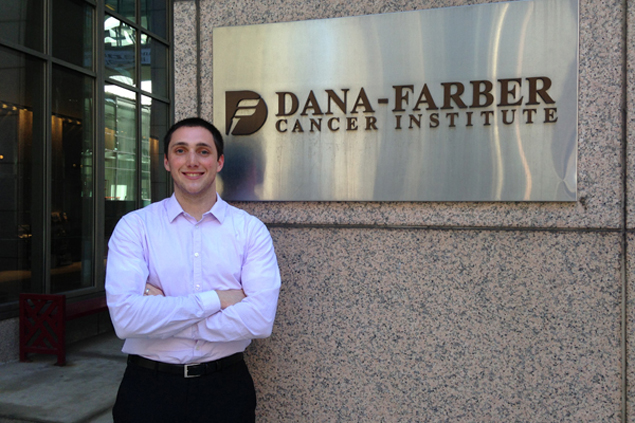 Kendall Sanderson, BS, Mechanical and Industrial Engineering 2013—To the indus­trial engi­neering major, one of the most fas­ci­nating prob­lems to solve is the effi­cient routing of delivery trucks around the country. When Sanderson learned he could apply this skill to the health­care industry to pre­vent mis­takes like those made with his mother, he knew he’d found his calling.

During his second year at North­eastern, Sanderson began working in the Health­care Sys­tems Engi­neering Insti­tute and National Sci­ence Foun­da­tion health­care center of James Ben­neyan, a pro­fessor of mechan­ical and indus­trial engi­neering with an hon­orary joint appoint­ment in the Bouvé Col­lege of Health Sci­ences. There, he learned about the tragedy of the health­care system: “It’s a $3 tril­lion industry,” Sanderson said, “and about 30 per­cent of that can be attrib­uted to inef­fi­cient, poorly designed processes.”

Sanderson’s work earned him one of 17 university’s Out­standing Coop­er­a­tive Edu­ca­tion Awards this spring as well as the Society for Health Sys­tems under­grad­uate schol­ar­ship, which is offered each year to one stu­dent in the country. He plans to join Benneyan’s new $8 mil­lion CMS center as a master’s degree can­di­date in the fall and to con­tinue making the health­care world more effi­cient over the course of his career.

Inspired by his own family’s experiences Kendall Sanderson has devoted his academic career to the optimization of the healthcare industry. His research focuses on patient flow, optimization, predictive modeling, scheduling and tools for real-time decision making. After receiving his BS in Industrial Engineering Sanderson is pursuing his MS in Operations Research at Northeastern University. His interests and skills fit his role as a graduate research assistant at the Healthcare Systems Engineering Institute (HSyE) led by program director James Benneyan. He began working at the HSyE as an undergraduate student which earned him an Outstanding Cooperative Education Award as well as the Society for Health Systems undergraduate scholarship, offered each year to one student in the country.

At Boston’s Veteran’s Admin­is­tra­tion Hos­pital, Sanderson got his first taste of what it’s like to be an engi­neer in a world dom­i­nated by physi­cians and clin­i­cians, whose main goal is to heal patients rather than effi­ciently move them around the hos­pital. In addi­tion to turning the nursing supply closets into spread­sheets of data that could be ana­lyzed and opti­mized, Sanderson assisted with process improve­ment work­shops for the hos­pital employees to imple­ment stan­dard effi­ciency pro­to­cols on their own.

For his second co-​​op, Sanderson spent two months man­u­ally tracking all of the patient and clin­i­cian activity in the pedi­atric floor at Dana Farber Cancer Insti­tute. Every 15 min­utes he’d take note of where patients were—in the waiting room, say, or in a hos­pital room with a nurse. He turned his notes into a mas­sive data­base that he used to model patient flow on the floor. With that kind of model in hand, he could iden­tify the areas most often over­crowded or under-​​utilized and the best solu­tions to address them.

At Dana Farber, he also worked on a pilot study that auto­mat­i­cally tracked that same infor­ma­tion using sen­sors embedded in the clinic’s roof and tracking devices car­ried by patients during their visits. Imple­menting that system on a large scale would be an expen­sive under­taking, Sanderson explained, but the invest­ment would be worth the cost if it could deliver suf­fi­cient waste savings.