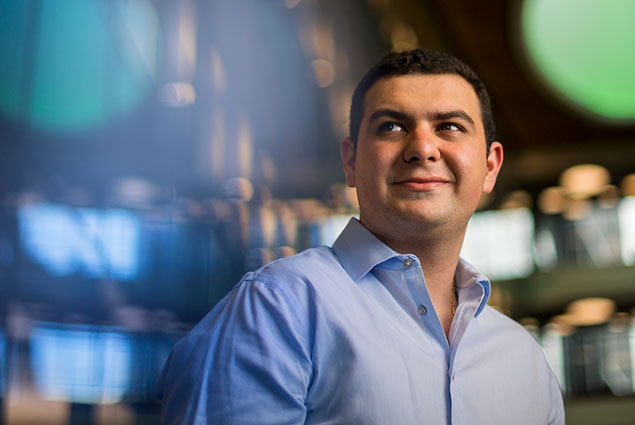 When Nader Yacaman Juha, BS Industrial Engineering 2018, was growing up in Honduras, he spent a lot of time walking around a hospital with his grandfather, who was a doctor there. Juha saw patients lying in hospital beds and realized how fortunate he was to be healthy. That feeling stayed with him and shaped his path through college.

Juha graduated from Northeastern Friday with a Bachelor of Science in industrial engineering. He was one of a handful of students President Joseph E. Aoun mentioned in his speech at Commencement.

Though Juha is a newly minted graduate, he has already started using his skills and education to help others. During a co-op at the Michael J. and Ann Sherman Center for Engineering Entrepreneurship Education at Northeastern, Juha started a company called IC Health, which aims to provide low-cost healthcare to people in Central America.

Juha knew he wanted to help Hondurans live healthier lives. To better understand their needs, he traveled back to his home country and started talking to people. He learned that one out of every eight Hondurans is diagnosed with diabetes.

“It’s a condition you have to stay on top of. If you don’t, it will consume you,” Juha said. “But that proactivity is something you need both energy and money for.”

Juha found that many diabetics in Honduras were failing to monitor their glucose levels — an important indicator of health for people with the disease. The patients he spoke with didn’t have money for a colorimeter, the device used to measure glucose from a drop of blood.

Juha used his engineering background to devise a plan to solve the problem. He formed a partnership with a company that makes colorimeters to design a new prototype that was simpler and less expensive than traditional devices. The new design employed only features that patients in Honduras needed — those that were vital for measuring glucose. Juha then tested the product with diabetes patients. And they were satisfied — with the ease of use and the price.

Currently, 20 people in Honduras are testing the device. Now that he’s graduated, Juha plans to work full time to grow IC Health. Driven by the memories of suffering he saw with his grandfather, and equipped with a Northeastern education, Juha is on track to dedicate his life to helping people.

“Entrepreneurs like Nader will lead us in building a better world,” said Aoun. “You’ve all cultivated this mindset at Northeastern.”