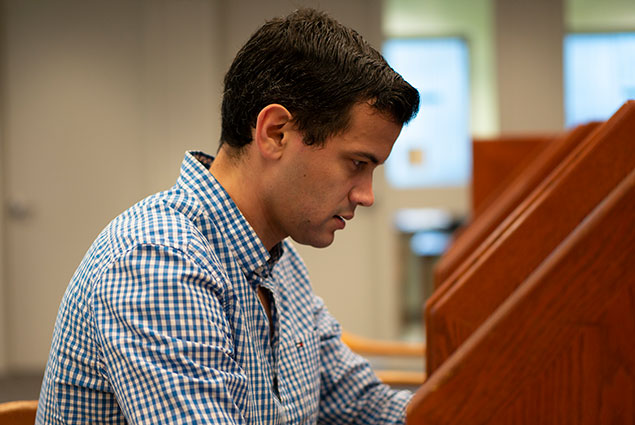 “I think that at the beginning it is kind of hard for everyone if you have never been to the United States. Once you get an understanding of how things are done and to do things like how to upload homework or find information, you get that it’s a super great experience,” said Lisandro Mentasti, MS, Data Analytics Engineering 2019.

For Mentasti and his life partner Marina Ponce, it was a hard transition moving from Argentina to the United States. It wasn’t just the aspect of moving across the other side of the equator, or the cultural differences, or the fact that they both had to give up their jobs that made the whole ordeal difficult. It was going back to being a student after 10 years of being a working professional.

“Moving here was a hard decision to make. You have to leave everything,” said Mentasti. “I had been working in the industry for several years, and I hadn’t been a student in a long time, so I was not sure if I was going to be capable of be one again. However, a year and a half later I can say that I am more than happy with the decision. It is a rewarding experience and it is worth all the effort it requires.  Marina and I are both thankful for the opportunity of being here.”

Mentasti, who was awarded the Fulbright Argentine Presidential Scholarship, had known for a long time that he wanted to work in analytics or data science, and that is why he wanted to pursue Northeastern’s MS program. He had previously worked at the Intel Corporation as a software engineer for over five years, before taking a job at the OLX Group/LetGo, where he worked as a DeV-ops Engineer.

He would continue working in this position remotely while taking classes for six months but ended up leaving the company to focus on his education fulltime, and later to co-op at Okta, in May of 2018. Okta is an identity management/security company on the West Coast, very far from Boston, and even farther from Argentina.

“It was one of my dreams to know what working in Silicon Valley feels like, and I luckily had the chance to achieve it,” said Mentasti.

Now, he is working toward becoming an entrepreneur.

“The start-up that we are working on is called Oraculi. The company aims to mentor professionals or students on topics on which they feel they need to improve or that they need career advice,” said Mentasti. “The company is targeted for the Latin America market for now, with the goal of someday becoming global.”

While Mentasti came in with a huge amount of professional experience, he knew that during his time here he could learn more and expand his knowledge. The professors and courses he’s taken while studying at Northeastern have really helped him in this instance.

“The professors are always giving you homework assignments and then feedback, so you always know where you would have to focus more, or when you’re doing something right. The professor will follow up constantly with you during the course,” said Mentasti. “The most interesting course that I’m taking is called neural net. It’s been amazing. We are working with cutting-edge tools like data mining, where we are able, for example, to classify users. It is super useful, because you can replicate this in every company. I’ve also taken a lot of classes in statistics, which is crucial because they give you a background on what you’re doing.”

A huge influence for Mentasti’s drive for success is where he grew up in Argentina, in Corrientes. The province has a 36.8 percent poverty rate, which is much higher than other areas, such as the Tierra del Fuego Province, which only has about 11 percent of its citizens living below the poverty line.

“What I really want to do is to work toward the development of my country, especially in a crucial aspect of economy growth, like technology,” said Mentasti. “After this experience, I’ll have the tools and knowledge needed to help people who haven’t had the same possibilities that I have. My goal is to open a start up in Argentina, to create jobs and to share my knowledge with others to create products and services that improve people’s lives.”