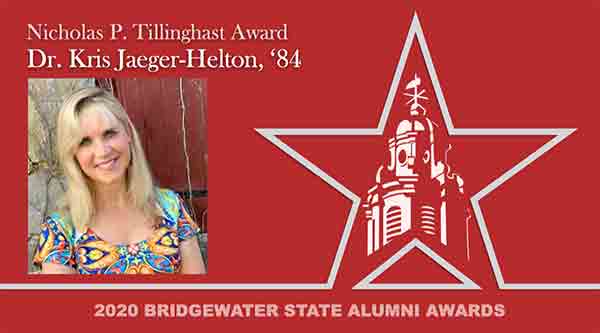 MIE Teaching Professor Beverly Jaeger-Helton received the Nicholas P. Tillinghast Award from Bridgewater State University, which is the highest honor bestowed upon an alumna by the University. The Nicholas P. Tillinghast Award was named in honor of the university’s first president (then called “headmaster”) who served in this pioneering post from 1840-1853. The award honors a Bridgewater alumnus/na who has demonstrated the qualities of outstanding leadership, excellence in performance, and outstanding personal achievement in the field of public education at the state, regional or national level.

Among her many accomplishments at Northeastern, she has served as associate director of the Virtual Environments Laboratory, is the director of capstone design in industrial engineering, been voted “Professor of the Year” by students 15 times, and was the founding director of the Galante Engineering Business Program. She hopes that this honorable distinction encourages others to strive for greatness: “I hope it would be an inspiration to others showing that with hard work and dedication we can continue to learn new skills, combine them with existing ones, and build bridges across a diversity of domains.”