In the ‘Spirits’ of Entrepreneurship Mechanical Engineering Alumnus Launches Company 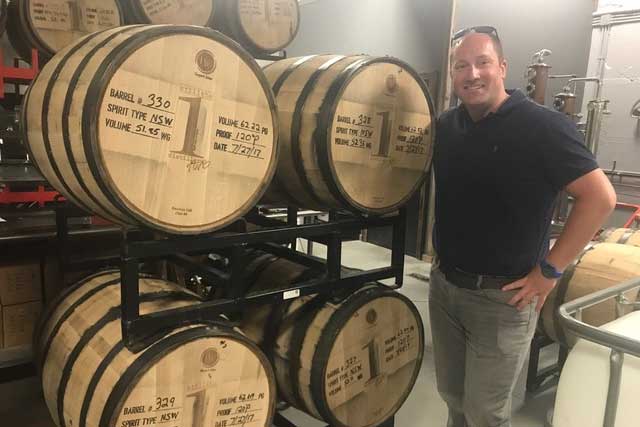 In early 2016, childhood best friends Patrick Carey and Jesse Sommer reunited to plot yet another entrepreneurial venture.  Inspired by the fervor of New York State’s budding craft spirits sector—and eager to pay homage to the agrarian community in which they’d been raised—they settled on what has since become the existential mission of New Scotland Spirits:  to distill whiskies from grains grown in their native hometown of New Scotland, NY.

“Our first hurdle was figuring out how we’d finance the project,” says Carey, a 2006 graduate of Northeastern University’s College of Engineering, with a bachelor’s degree in mechanical engineering.  “The cost of constructing a distillery was daunting.”

But that’s when he and Jesse had the epiphany at the core of their business model.  “We recognized that the State of New York itself was our distillery.  The Hudson Valley already had all these new distilling operations; we would make the Capital Region our multi-facility manufacturing plant.”

It was this realization that made their project feasible. The math revealed that by avoiding all overhead costs (maintenance, repairs, rent, construction), they could still come out ahead even after factoring in the premium of contract distilling.

“There isn’t a whiskey on the market that’s entirely single-source,” Carey says. “The oak barrel gives aged whiskey its flavor, but most distilleries aren’t their cooperages. Most distilleries don’t manufacture their own glass bottles. When it dawned on us that we could source our stills like every other process component, we became free to focus on what made us different as ‘New Scots’:  our grain.”

So began the six-year journey that just next month will witness the launch of their sales effort. It’s been a journey characterized by a strict division of labor; while Carey borrowed on his education at Northeastern University to erect the supply chain, Sommer—an attorney by trade—was responsible for locking it together with contracts.

“I scouted all over upstate NY looking for distilleries with excess [production] capacity,” Carey says.  “I sampled their spirits to identify which distillers excelled in a given whiskey. Once I’d identified who made the best rye, or the best bourbon, Jesse would get the deal done.”

Carey similarly found the cooperage whose barrels offered the most authentic flavor, identified the brands’ iconic glass bottle shape, and found the artist who’s given the company’s labels their signature aesthetic.

“Northeastern University is where I was first exposed to the precepts of process engineering,” Carey says of his alma mater. “And it’s where I got my first taste of the business world, hosting a radio show on WRBB [the college radio station].  Sommer was hosting the other franchise of this program at his school in Connecticut, and we would trade original comedy bits back and forth for broadcast to build an audience.  In many ways, the tactics are identical to what we’re doing now to market our whiskies.”

New Scotland Spirits produces a single malt whiskey, a rye whiskey, a wheat whiskey, a bourbon whiskey, with a corn whiskey on the way.  “We want to celebrate what the fields and farmers of New Scotland can do,” Carey says.  “Whiskey isn’t a product that can be rushed.  And because Sommer was finishing up his last half-decade of military service, we had ample supply of the most critical ingredient required to craft a fine whiskey:  time.  If there’s one thing a lifelong friendship teaches you, it’s that there’s value to waiting.

Carey and Sommer’s upbringing in such a close-knit community was unique. As Kindergarten through 12th grade graduates of a rural upstate village, they had lots of opportunity to flex their creative muscle.  “We published an underground newspaper, took over management of the school newspaper, performed in a band together, and got into all sorts of trouble together,” he says.  “Our whiskey company is just the latest example of the creative exploits that New Scotland made possible. The only difference is that instead of getting in trouble drinking whiskey, now we’re getting paid for it.