AIAA Student Club Readies to Land a Rover on a Planet 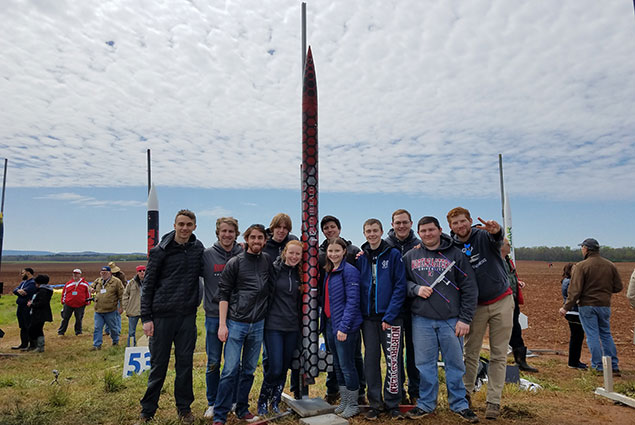 Fourth-year mechanical engineering and geology/physics student Harry Brodsky, E’19, is leading a team of students that are preparing to land a rover on another planet. Kind of. They are designing and building a rocket and planetary rover—complete with solar panels—to launch, descend safely, and deploy. The only catch is that it will land on Earth after rocketing up to just 5,280 feet.

“We’re going to pretend that it landed on another planet and try to deploy a rover onto this planet,” Brodsky said. “The rover will come out of the tube of the rocket and roll away, and deploy its solar panels.”

Brodsky is the president of the College of Engineering’s student club, American Institute of Aeronautics and Astronautics, or AIAA. The 150 member Northeastern Chapter club focuses on aerospace engineering research projects in which students come up with proposals and can receive funding and lab space to actually build them. “We pretty much approve everything that’s brought to us because our members have great ideas,” Brodsky said. And everyone is welcome—we give everyone an introduction to rocketry course, where members build their own rocket at no cost to them. AIAA was awarded the Richard E. Sochacki Organization of the Year Award (Spring 2018) from Northeastern University’s the Center of Student Involvement.

During Spring 2018 the team was engaged in six projects, including a national competition. The rover project is part of NASA’s University Student Launch Initiative, where, according to NASA, colleges and universities across the nation participate in an eight-month commitment to design, build, and fly payloads or vehicle components that support the Space Launch System. The competition took place in April 2018 at the Marshall Space Flight Center in Huntsville, Ala. Brodsky led the project, and aside from the administrative duties that came with that position, he worked on the engineering and design for the payload ejection—how the rover will exit the rocket after it lands.

One longer-term project is a bit more ambitious: The Karmen project, named for the “Karmen Line,” which is known to be the border of space at 100 kilometers above sea level, aims to launch a rocket to the edge of space. This is not the same as launching a rocket into orbit, which Brodsky said is much more difficult. “We’re just trying to get it to the edge of space and it will come back down,” he said.

As president of AIAA, Brodsky uses his technical knowledge often but also serves as the club’s promoter-in-chief. “What I like to do best is to go to people and tell them how great our club is,” he said, “just to get the word out and convince them as aerospace is important and that our students are doing really, really, really cool things.”

His time at Northeastern, particularly his work in AIAA, has changed the course of his career. He said he came into college set on doing something related to space, but fell in love with geology. He is currently at the MIT Department of Earth, Atmospheric and Planetary Sciences studying lunar volcanics.

“I’d like to go to grad school for planetary science,” he said. “I think AIAA is helping me pursue my career in this field by understanding the tools that scientists use to get data from targets that are nowhere near where they work, like Mars.” Brodsky added, “We have fun and we learn all at the same time.”